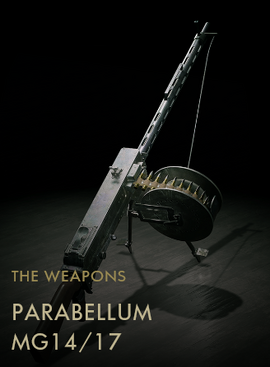 The manufacturer of the famous Pistole 08 redesigned the heavy MG 08 into the lighter Parabellum MG14, but it arrived too late and the MG 08 remained the standard German heavy machine gun at the start of WW1. Instead the MG14 would be used extensively as an airship weapon, and in flexible mounts on two-seater aircraft. The MG14 was also used in the early development of the synchronization gear for firing through the propeller on Fokker E.I. prototype airplanes. The MG14 had a high rate of fire of 700 rpm and fed from a belt enclosed in a 250-round drum. When mounted on airships the gun had a water jacket, while it used a slotted jacket when mounted on airplanes. The MG 14/17 model had a much thinner perforated air-cooled jacket and was typically equipped with a 3x telescopic sight. Rarely issued to ground units early in the war, towards the end of WW1 the need for light machine guns on the ground increased, and the MG14 was more often pressed into service as an infantry weapon.

Retrieved from "https://battlefield.fandom.com/wiki/Parabellum_MG14/17_(Codex_Entry)?oldid=343220"
Community content is available under CC-BY-SA unless otherwise noted.