Paracel Storm (Chinese: 西沙風暴) is a multiplayer map featured in Battlefield 4. It is set in the Paracel Islands on the South China Sea. The map features combined arms gameplay, with a focus on both naval and aerial warfare with attack boats and jets being present in the map.

The layout features a large island to the north, and roughly seven smaller islands to the south. Three of the smaller islands are connected by bridges. The layout is generally symmetric, mirrored from west to east.

Sometime during the round, air raid sirens will alert players to an incoming tropical storm. The storm will start pouring rain down on the island and cause the once still ocean to develop rolling waves. This also overloads a wind turbine that, when destroyed, causes a destroyer to eventually crash into one of the many islands.

The northernmost flag, located on the north side of the largest island. It can be captured from the sea. There is a small building identical to the one at B flag, allowing for light cover. A few large explosive drums appear here, and can kill infantry that might be lurking near them. A metal roof covers these, allowing for more cover. A few shipping crates also provide cover here, but it's mostly barren.

A radar tower stands to the south, in the middle of the island. The M82A3 appears here as a Battle Pickup, on the very top of the radar tower. Some of the walls on this radar tower can be destroyed, potentially exposing players hiding there.

The barracks buildings stand on the south side of the same large island containing the Dockyard. The buildings and the yard they enclose are fairly set off from the rest of the map. All 3 large buildings can be destroyed, along with most of the smaller building in front of them. There is a small stone monument near these buildings, but otherwise there is not too much cover for infantry to hide, making it essential the larger buildings remain un-destroyed.

Four emplacements are mounted ashore, two facing south, and the others facing east and west. The USAS-12 appears here as a Battle Pickup, near a radio dish emplacement.

A series of trenches on this island help protect a building complex on this western island. The large building in the center, identical to the one on several other maps, is able to be brought down, reducing cover. There are a few wooden guard towers here with mounted machine guns in them, alllowing defending infantry to hold off hostile attackers who might be storming the beach. There are a very large amount of palm trees scattered around this island, providing good cover from air threats, boats and snipers. There is also a large wood and steel bridge connecting this island to a smaller one, and some PWC also spawn here, allowing for a quick getaway.

This island contains a solar panel array and two emplacements.

An island to the south connects Solar Island to Firebase Island by bridges. There are three emplacements protecting this island, two being .50 Cal machine guns and a single HJ-8 Launcher. A large building identical to the one at Firebase Island appears here, also able to be destroyed. The solar panel array provides very light cover, as a very small amount of damage is capable of destroying them. A large amount of trees here provide very good cover, offering thick protection from explosions, enemy air vehicles and small arms fire. A RHIB Boat also spawn here right next to the beach.

Vehicle resource: Depending on which team controls it an AH-6 Little Bird (US) or Z-11W (CN) may spawn here.

A destroyed aircraft carrier remains scuttled to the south. The capture area is on the front half, which leans slightly away. The listing deck and aircraft wreckage provide cover. (There does not appear to be enough slope for the wreckage to be used as environmental hazards as in "Angry Sea".) There are some narrow passageways that are partially flooded under the flight-deck which can be accessed by small, hard to spot breaches in the deck. The other half of the ship that is out of the flag area can provide a good place for snipers to set up, and even parachute onto the large tower-like section there. The entire ship area is also the closest place that is to the Levolution trigger point, so a Engineer can keep spawning here over and over with rockets, quickly triggering the main Levolution event.

Levolution: Very close to the shipwreck stand a series of windmills set in the open ocean. A wrecked American warship floats near the closest of these windmills. When the storm arrives, the windmill can be destroyed (even with infantry firearms), causing the storm to carry the warship ashore. As it runs aground, it will destroy much of the building complex. The warship deck becomes part of the capture area, the Centurion C-RAM on it will engage spotted aircraft of the team that doesn't control the flag. The M82A3 MID and HVM-II appear here as battle pickups after the destroyer has ran aground at C flag.

The bomb generally spawns on the larger island to the north (Dockyard and Barracks). The six Bomb drops are generally located on the smaller islands to the south.

Both teams can deploy via paradrop towards the southern part of the large island, where the Barracks are located.

This map has four stages in Rush mode.

The attackers (US) start aboard the USS Essex, while the defenders (CN) start at what remains of the USS Harry S. Truman.

The attackers start with several RHIB Boats, an RCB-90, and a UH-1Y Venom. The defenders only get 1 RHIB Boat and 2 PWCs.

Team Deathmatch and Squad Deathmatch take place around the barracks. Intense CQB occurs as a result yet the edges of the map as well as the ability to look over the balconies of the barracks allows for some mid-long range combat.

Domination takes place around the Barracks, similar to Defuse and TDM/SDM. One flag is located at the basketball court, one by the trenches, and one at the isolated area in between the barracks and the building towards the MGs.

Defuse on Paracel Storm is located similarly to its TDM/SDM and Domination counterparts, being in the Barracks area.

Close to the end of the match a storm will hit, causing heavy rain to fall and high winds and waves around the map. The storm will reduce visibility and make the map darker and wetter.

When the storm hits lightning will strike a wind turbine that is between the half-sunken aircraft carrier and the US deployment. Shooting explosives, high caliber bullets or other projectiles at the crack in the turbine's exterior will cause it to collapse, in turn releasing the destroyer that is trapped on it. The destroyer will crash into an island and change map flow.

There are several rope ladders leading to the deck of the destroyer after it crashes into the island. On top there are several non-functioning turrets, and a Centurion C-RAM that will fire upon all hostile air vehicles and MAV's that have been spotted at any range, effectivley making all enemy air vehicles unable to tread safley around the map without the risk of being shot down.

A US squad attacking the islands in a RHIB Boat

One of the colourful birds that appear all around the map.

A RHIB Boat engages a Z-11W 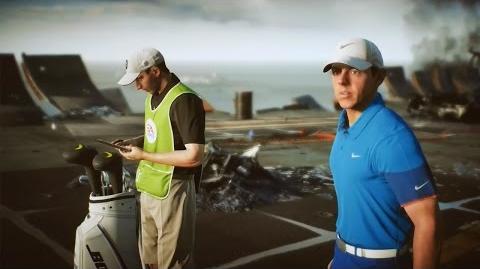