A Parachute is a device used to slow the motion of an object through an atmosphere by creating drag. Parachutes must slow an object's terminal vertical speed by a minimum 75% in order to be classified as such. Parachutes are used numerous times in the Battlefield Series, appearing in nearly every Battlefield game with the sole exception being Battlefield: Bad Company.

In Battlefield 1942, the parachute can be deployed when falling, though there are several restrictions on this criterion. The player must be moving at a sufficient speed to take damage, otherwise the parachute is unnecessary. The player must also be falling nearly vertically and at a certain height, otherwise the parachute will not deploy. Once deployed, the effects are immediate. The falling speed is reduced, no damage will be taken upon landing and the player can fire their weapons, although with a loss of accuracy.

Parachutes do not appear in the Secret Weapons of WWII expansion pack, instead being replaced with a jet pack.

Canadian soldiers parachute down into Caen

The Parachute in Battlefield 2 is activated by pressing the parachute key (Default key: 9). Like other installments in the series, it must be deployed at a certain height to be effective and allows players to shoot when the chute is pulled, albeit with decreased accuracy.

A player using a parachute in Battlefield 2.

A PLA soldier using a parachute.

The Parachute in Battlefield 2142 can be opened by pressing Jump whilst having been falling for over one second, and being some distance from the ground and any adjacent walls. It is less frequently seen in the game, as bailing out of certain vehicles puts the player into an assault pod. It is most commonly used when exiting a Titan from the rear decks, or bailing from a Gunship. It also has next to no steering capacity, which means the player will 90% of the time land directly beneath where the parachute is deployed.

While the player is vulnerable to fire, the parachute canopy itself is considered an indestructible object. This can cause an air vehicle at full health to be completely demolished on contact with a parachute. It is also possible for infantry above the parachutist to receive fatal falling damage on hitting the canopy. In both instances, the parachute user may escape with no damage.

In Battlefield 1943, the parachute is usable when a player ejects from a plane or when a player jumps from high ground. It can be deployed by pressing the jump button with weapons still usable while falling toward the ground. The "Parachutist" achievement/trophy can be earned for using the parachute once, for at least two seconds.

In Battlefield Heroes the parachute can be equipped by pressing the space bar while in midair. The player can guide his/her player down to a better location using the movement buttons, and use all infantry weapons and widgets, though the player cannot look outside of the front 180 degrees arc. 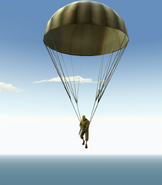 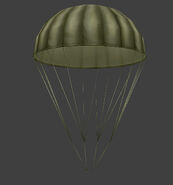 The Parachute in Battlefield: Bad Company 2 is activated by pressing the jump key while in mid-air, the parachute can be used in the singleplayer campaign, and the player has to activate the parachute in the beginning of No One Gets Left Behind. In multiplayer, players on the Russian team start out in parachutes on specific levels.

There is a glitch where the parachute wasn't deployed though it can be pulled again. Unfortunately, the game doesn't tell new players how to deploy the parachute itself and can kill them through fall damage.

Like previous installments, it allows players to shoot weapons when gliding down though with decreased accuracy. Users will also get a Parachute Kill bonus if they achieve a kill while descending with a parachute.

In Battlefield 3, a parachute takes time to deploy. To avoid fall damage and death, players must now deploy their chute at a sufficient altitude to slow their descent. Falls from a certain height may be fatal to the player while also being less than needed to open the parachute properly.

While parachuting, the player will drift forward. Aiming is limited—much like when using a bipod or while prone—and very shaky.

On maps featuring aircraft, spawning on a Radio Beacon placed in the open will cause the player to appear by parachute. The player can advance as much as 150 meters ahead of the beacon by drifting normally. The player starts from a height of about 100 meters, higher than any of the construction cranes and most towers, so beacons are often used to access these areas. Therefore, for every 1 meter the player drops, the player travels 1.5 meters forward.

The September 2014 patch added the ability for players to display their emblems on their deployed parachute.

An option allows the player's parachute to deploy automatically or manually. The "manual" setting occasionally causes problems with the Obliteration gamemode for players using the paradrop spawn point before round start, as they do not yet have control of their character.

The parachute is featured in Battlefield Hardline, functioning in the same exact manner as its Battlefield 4 counterpart.

Equipment
The parachute returns as all-kit equipment Battlefield 1. It functions in a manner similar to its Battlefield 4 counterpart, although a round parachute is used like the one from Battlefield 1942.

The parachute requires a greater fall height before it can be used than in prior games, and does not travel as far forward. Once deployed, it can be turned, flared, and opened as needed to control descent or avoid enemy fire.

After the November 2017 update, players who spawn in mid-air will automatically deploy a parachute.

Equipment
The Parachute features in Battlefield V. While the parachute is deployed, the player will be animated with their hands holding the harness, although weapons and gadgets may still be used by pressing the fire button. Upon landing, there is a short impact animation that lasts for less than a second.

In the Airborne gamemode of Grand Operations, attackers have an automatically opening parachute upon exiting the C-47, and Pilots may open their parachute at any time after leaving their own aircraft. Outside of these circumstances, the fall required to open a parachute is even greater than that in Battlefield 1 at around 22 meters. The distance means it is generally opens too late for use when jumping off most buildings and structures, but can be used to survive a fall from the Bridge deck on Twisted Steel with some damage. The parachute can be used as normal from taller structures, such as top of the bridge or the viaduct on Hamada.

The Parachute will return in Battlefield 2042 as a mobility gadget for all infantry, with likely exception of the specialist Sundance.

This iteration of the parachute uses a ram air parafoil design controlled by two handles. Holding Sprint allows the player to steer the parachute, while also preventing the player from handling their kit. The player may now cut the parachute (Crouch) to return to freefall, and redeploy their parachute at a lower altitude.

Prior versions of the Parachute also return in Battlefield Portal as part of each component game's equipment. There are expected to be minor differences in each game's parachute behavior, such as maneuverability, conditions for opening, and button presses to activate.

When caught in a tornado, the parachute allows the player to regain some control over their own movement, and also some altitude in open areas where there would otherwise be no opportunity to do so.