Passchendaele is a Codex Entry featured in Battlefield 1, introduced in the Apocalypse expansion. It is unlocked by winning a round on Passchendaele. 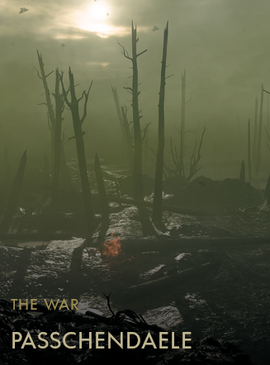 In the spring of 1917, the German unrestricted submarine warfare campaign had raised serious converns in British High Command. So twelve British and French divisions were gathered that summer to attack the German Fourth Army near the small Belgian village of Passchendaele, to break through and force the Germans to abandon their submarine bases on the Belgian coast. The Battle of Passchendaele, also known as The Third Battle of Ypres, began on July 31st, 1917, with an artillery barrage of over four million shells, which not only obliterated the German forward defenses, but also destroyed the drainage system of the whole region. The initial infantry attacks took the remnants of the front lines from the stunned defenders with relative ease, but the German army was now fighting in a multi-layerd flexible defense grip, consisting of mutually supporting strong points and shell-proof pillboxes that withstood large breakthrough attempts. Specially trained German counterattack troops engaged the British and prevented any real advance. General Herbert Plumer answered with small, locally confined "bite-and-hold" attacks, which efficiently focused on capturing and destroying the German strong points. However, the autumn rains soon turned the blasted battlefield into a sodden muddy swamp, in which men and horses could sink, never to again surface. Like the Somme, this battle deteriorated into a horrifically bloody battle of attrition, and- again like the Somme- it was the impeding winter that ended the struggle, shortly after the British capture of what little remained standing of the village of Passchendaele.

Retrieved from "https://battlefield.fandom.com/wiki/Passchendaele_(Codex_Entry)?oldid=371695"
Community content is available under CC-BY-SA unless otherwise noted.