18 seconds
"(Air or) Surface-to-air missiles that require the to lock be maintained all the way to the target. Can be fired before a lock has been acquired. Cannot lock aircraft flying at low altitude"

The missile requires constant lock tracking on its target. It has 650 meter lock-on and tracking range. The Passive Radar missiles can reacquire lock if it is broken (visual obstructions, countermeasures), one common tactic is to fire at the target, break the contact as the target releases countermeasure, then reacquire the target. Compared to other vehicle-fired Anti-Aircraft missiles, the Passive Radar missiles will have a better chance at getting to their target unless they are deterred by countermeasures or the target flies out of the effective range of the missile. The operator must be weary as they will be left vulnerable to attack while targeting and tracking the aerial target. The Passive Radar missile is recommended to be used in wide, open maps, with Silk Road being a prime example; where the target has less cover to break locks.

The Passive Radar missiles can be fired without the need of an initial target lock, but must still be locked and aimed at the target for it to home in and impact (unless of course, defeated by counter-measures.) after the Battlefield 4: Community Operations update. This allows for the operator of the missile to launch it discretely and then acquire target lock once missile is within extremely close proximity. Operators can also choose to utilize the target range calculator for precise timing of locks. When done correctly, this leaves almost no room for reaction time for targeted aircraft to react or to utilize onboard counter-measures before the missile hits after it is fired, unless such counter-measures are activated before the lock is acquired. Pilots utilizing IR Flares are particularly vulnerable to his tactic. A general rule for maximum effect is to first acquire the distance of the target to the launch source, fire the missile without an initial target lock then begin counting a second for every 100 meters before locking on (e.g. if target is 300 meters away, the operator must let the missile travel freely through the air for exactly 3 seconds before acquiring target lock). Missiles fired at aircraft leave a particularly blatant exhaust plume and missile streak which can be easily identifiable, especially vehicles equipped with secondary weapons which contain a magnification/zoom-in ability (such as the Laser Guided or TV Missiles), where it makes spotting the incoming missile from a further distance more easily and thus, targeted pilots can act accordingly.

Due to the launching and targeting nature of the Passive Radar missile, more experienced pilots may be able to discern Passive Radar missile from other similar Anti-Aircraft missile types. It's initial launch method is similar to that of the Active Radar missile: requiring no initial lock for firing, therefore being able to be separated from Heat Seekers and thus, targeted pilots can act accordingly to counter their attacks.

Like the FGM-148 Javelin and HVM-II, it is possible to deliberately break lock and acquire a different target before the missiles expire. Due to a bug caused by breaking and re-acquiring lock-on targets with both SA-18 IGLA and Passive Radar missile, both missile's travel speed will increase by twofold when lock is deliberately broken and the target is re-acquired after missile is fired.

The Belt Feeder Specialization allows for faster missile arming and reload but does not decrease reserve ammunition reload speed.

The following is a list of effects and damage to specific air vehicles from impacts by the Passive Radar missiles. Damage results are consistent at any angle of impact.

Passive Radar Missile being fired from a Mobile Anti-Aircraft system

Passive Radar Missile being fired and homing in on a UAV

Passive Radar missile being fired from a Stealth Jet 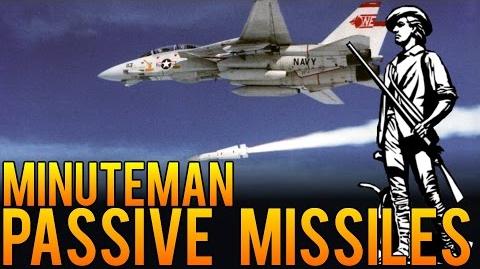 Retrieved from "https://battlefield.fandom.com/wiki/Passive_Radar?oldid=358265"
Community content is available under CC-BY-SA unless otherwise noted.