The Peacekeeper is a Codex Entry featured in Battlefield 1. It its unlocked upon obtaining ten kills with the Peacekeeper. 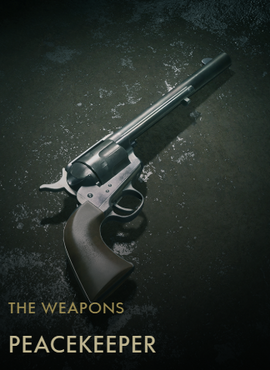 A single action revolver that could hold up to 6 rounds in a rotating cylinder. Manufactured since 1873, the gun saw many variations in barrel length and caliber, but kept its robust and reliable image. Originally designed for cavalry and artillerymen, the revolver was also very popular among outlaws and gunfighters in the late 19th century. The Peacekeeper revolver was officially replaced as the war began, though American officers still brought the guns with them to the battlefields of Europe.

Retrieved from "https://battlefield.fandom.com/wiki/Peacekeeper_(Codex_Entry)?oldid=343263"
Community content is available under CC-BY-SA unless otherwise noted.