For the similarly named faction, see People's Liberation and Resistance

The People's Liberation Army (Chinese: 中国人民解放军) is the official name of the Chinese armed forces. Founded in 1921 under the control of Communist Party of China, they participated in the Chinese Civil War, extended over certain periods between 1927 and 1950. As the PLA was victorious over the Republic of China's forces, the Communist Party of China took control officially in 1949 and created the People's Republic of China. From there on out, the PLA became the main military force of the PRC. Presently, it consists of 5 branches: the Ground Force, the Navy, the Air Force, the Second Artillery Corps and the Armed Police.

It currently has the largest number of active personnel in the world at 2.3 million soldiers.

In Battlefield 2, the PLA fights the United States Marine Corps and the European Union alongside the Middle Eastern Coalition,

Engagements against the USMC[]

Engagements against the EU[]

Engagements against the European Union[] 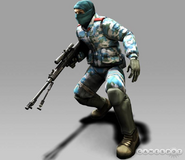 A trio of PLA soldiers. From left to right are the Engineer, Assault and Support.

In Battlefield 4, the People's Liberation Army forms the main antagonist faction in the singleplayer campaign. The PLA appears in all the levels with the exception of Baku and Tashgar, where the Russian Ground Forces are instead present.

The PLA's first appearance is in Shanghai, where Tombstone Squad is sent to extract Kovic and two other VIPs. The PLA is fought whilst extracting the VIPs. After the VIPs are extracted from Shanghai by helicopter, Tombstone is left behind, forced to escape Shanghai on foot. PLA forces battle Tombstone through alleyways and streets, while the squad is trying to reach a nearby harbor to escape by water. While Tombstone is pulling out of Shanghai in a civilian boat, Chang detonates an EMP blast in Shanghai, causing a mass blackout in the city, and causing a Z-10 to crash near Tombstone's boat, and crippling the electronics of the USS Valkyrie and the rest of the Seventh Fleet.

In the South China Sea, the PLA launches an assault on all nearby US ships in the South China Sea. The USS Titan is among those attacked and is fatally damaged by PLA forces, who board the carrier to find the voyage recorder. Tombstone is sent to find and secure the voyage recorder before the PLA can. Tombstone manages to secure the Voyage recorder and comes across several PLA soldiers. A firefight ensues under the deck before the ship splits in two, beginning to sink. Tombstone fights the PLA on the flight deck before escaping via a DV-15 Interceptor. The PLA then besiege the Valkyrie but are repelled by the Valkyrie's defenders with the help of Tombstone.

Tombstone participates in an amphibious assault on Singapore to blow up an airport housing PLAAF attack jets threatening to wipe out the remnants of the US fleet. The Marines successfully clear the beach and push through to the city, losing most of their forces in the process. Tombstone continues alone, infiltrating the airport. After defeating fierce Chinese resistance, Tombstone launches the signal flare for Garrison to fire the Valkyrie's missiles at the airfield. The airport is destroyed, but Tombstone's vehicle crashes, and Irish and Recker are captured by PLA forces led by an apparently traitorous Hannah. Irish and Recker are sent to a fortified prison in Kunlun Mountains, while Pac is left on the tarmac, assumed dead.

In the Kunlun Mountains prison, the PLA will appear halfway through the level to assist the MPS prison guards in stopping an escape by Dima, Recker and Irish. After reaching the outside, Tombstone then proceeds to fight their way to a cable car and escape. A Z-11W arrives and shoots down the cable car, killing Dima.

After helping USMC forces retake Tashgar from Russian forces, Tombstone receives a C-130 trip to the Valkyrie, which is now in Suez, Egypt, where the PLA has taken over the northern part of the Suez Canal. Tombstone finds the ship again under siege by PLA troops. Tombstone then fights its way through the ship to find Garrison. Jin Jie reveals himself to a squad of PLA soldiers that breach the medical bay that he, Tombstone, and Garrison are in, ceasing hostilities between Tombstone and the PLA soldiers. The PLA quickly spreads the news to other PLA forces on the ship. Admiral Chang attempts to destroy the USS Valkyrie in order to "bury the truth". Tombstone then proceeds to use C4 and an RHIB boat to destroy Chang's warship. After the detonation fails, either Irish or Hannah can be chosen to manually plant another C4 charge to destroy Chang's ship, putting an end to the war between Russia, China, and the US. If neither is chosen, or in the player does not detonate the charge in time, the Valkyrie will be destroyed, and the war will continue.

The uniforms they wear come in five varieties, in which most of them are in Oceanic Blue Camo:

The Chinese operate a wide variety of vehicles in Battlefield 4, almost all of which are Chinese in origin. Q-5 Fantans are their jet of choice in the singleplayer. Their main battle tank is the Type 99. The ZBD-09 and Type 95 are operated as APCs. On the water, they wield DV-15 and RHIB boats. The ZFB-05 appears as a sort of fast attack vehicle. In terms of helicopters, they operate both the Z-9, Z-10W and Z-11W.

In multiplayer, the People's Liberation Army fights against the United States Marine Corps and Russian Ground Force. The PLA fight the USMC on all maps they are present on by default, with the exception of Golmud Railway, Rogue Transmission and Lancang Dam, where they combat the RGF instead.

Due to the choice of factions on a map being up to the server operator in Battlefield 4, the PLA can appear on any map against any other faction, including the PLA itself, if the server owner wishes so (Official DICE servers always use the default system, however).

By default, PLA soldiers in multiplayer are equipped with Type 07 GI camouflage, but can unlock faction specific camouflages from Battlepacks, such as Urban Airborne or PLA Desert. Camouflages like Splinter and Fire Starter receive a unique scheme for the PLA when equipped.

The following are the camouflages exclusive to the PLA in Battlefield 4:

The following loadouts shown below are the kit defaults for the PLA in Battlefield 4's multiplayer mode. Unlike Battlefield 3, there are no asymmetric starting weapons (and thus no faction-specific weaponry), and the starting gear and weapons are shared across all three factions, similar to Bad Company 2.

The following are vehicles available to PLA units in multiplayer. Other vehicles, like the LD-2000 AA, are also used by the PLA faction, but cannot be directly controlled by the player. Vehicles used by other factions can also be commandeered by the PLA if they are not be operated by an enemy player.

Render of a Regular PLA soldier in singleplayer. Note that they carry two pistols.

Render of a PLA special forces soldier in singleplayer. Note that they have body of PLA Recon and head of PLA Engineer.

Render of PLA Machine gunner in singleplayer. They are immune to headshots.

Render of PLA Anti-Tank in Singleplayer. Note that they look more like the RGF engineer.

Another. Note that they have the body of PLA Engineer and legs of PLA Recon.

Render of PLA Sniper in Singleplayer. Note that they are identical to the RGF Recon except legs.

Renders of the PLA multiplayer classes.