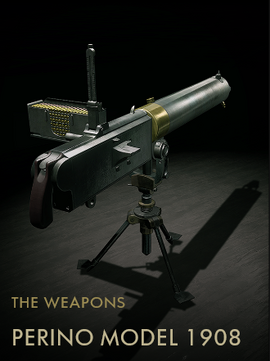 The Perino 1908 was the first automatic weapon designed in Italy. Giuseppe Perino, engineer of the Italian cavalry’s artillery, developed his machine gun in 1901, and it began testing in 1903. It was water-cooled and fed from 20-round feed strips, similar to the French Hotchkiss. But the Perino put the empty cases back into the strip as it fed through the action, which prevented spent casings from hitting the gun crew. The Perino machine gun typically had a box mounted on the side which contained five loaded strips that were fed into the gun from the bottom, allowing the assistant gunner to keep the ammunition box constantly topped up. To encourage national production, the Italian Army finally approved the purchase of 150 Perino machine guns in 1908, after years of testing, and these were mounted in fortresses along the border. When WW1 began the Perino 1908’s were instead deployed for field use.

Retrieved from "https://battlefield.fandom.com/wiki/Perino_Model_1908_(Codex_Entry)?oldid=343212"
Community content is available under CC-BY-SA unless otherwise noted.