US Army vs. NVA

Phu Bai Valley is a map featured in the Battlefield: Bad Company 2: Vietnam expansion. Phu Bai is a mostly open area, with flat roads and rice paddies. Its combat consists mostly of vehicular warfare, with helicopter, tanks and jeeps available. In infantry situations, there is a large variety of medium to long range combat areas, though close combat will be mostly present in the villages and jungle areas dotted around the map.

"US command has ordered the securing of an entire valley capable of producing vast amounts of rice for the NVA. A fully mechanized batallion has been deployed, but are looking at stiff opposition as an NVA tank platoon is guarding the area."

The US Deployment is the starting area for the United States Army, located at the military base in the northern-most area of the map, just as in Rush mode. The NVA will be out of bounds if they enter this area. It is capable of spawning two M48 Pattons, two M151s and one UH-1 Iroquois. In some cases when the NVA has taken all the Fire Bases they usually would stand closest to the US Deployment, they can't go further because of the restricted area to avoid spawn trapping however most of the time they would get kills anyway.

Flag A is the closest flag to the American base, located it the small cluster of houses and bunkers at the exit of the American base. It is capable of spawning, under US control, one M151 and, under NVA control, one GAZ-69, as well as a Tuk-Tuk regardless of the faction controlling the flag (even if it is neutral).

Flag B is located in the West of the map, and consists of a village situated on flat-topped hill. There are three roads that lead to it, coming from all sides except from the West, and infantry can easily climb from the sloped areas. It is capable of spawning one UH-1 Iroquois regardless of the faction controlling it, and one Tuk-Tuk that always spawns (even if it is neutral).

Flag C is located in the East of the map. It consists of a shallow waterway with a few docks extending into it, surrounded by wooden fortifications and structures which lead to the a road to the East, or a small cluster of houses to the West and South. It is capable of spawning, under US control, one M151 and, under NVA control, one GAZ-69, as well as a Tuk-Tuk regardless of the faction controlling the flag (even if it is neutral).

The NVA Deployment is the starting area for the North Vietnamese Army, located at the hidden base in the southern-most area of the map. The US Army will be out of bounds if they enter this area. It is capable of spawning three T-54s and two GAZ-69s.

In Squad Deathmatch mode, the map cuts off from the road that leads to the American base, to the road that stretches across the rice fields. Players can go to the positions of all the conquest flags. In the center, there is a UH-1 Iroquois available for use.

An overview of Phu Bai Valley. The US Base is above point Alpha while the NVA base is below points Bravo and Charlie.

A US UH-1 Iroquois hovers over control point Bravo.

A NVA T-54 fires its secondary machine gun upon a UH-1 flying over the valley.

Image of the center 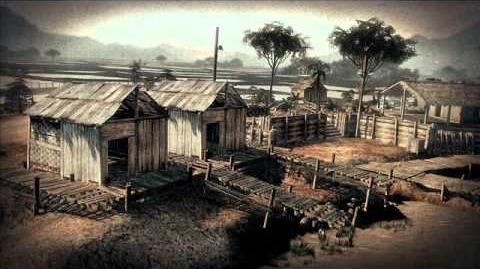