Planes Above the Sand is a Codex Entry featured in Battlefield 1. It is unlocked by keeping at least two Field Guns operational in the chapter Hear the Desert in the singleplayer mission Nothing Is Written. 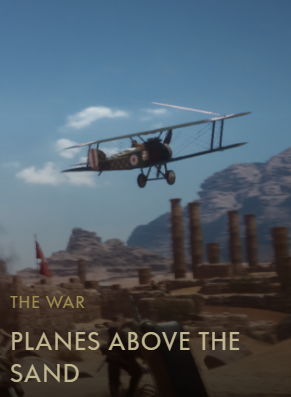 Until 1917, the Germans and Ottomans had enjoyed a period of air superiority in Palestine. Practically unopposed by the small numbers of outdated EEF planes, the Levant Corps was able to provide protection against British observation attempts, British General Allenby ordered the creation of a new air force at the Suez Canal, and the No.5 and No.40 Wings of the Royal Flying Corps. They were known as the Palestine Brigade.

While one corps was tasked with supporting troops on the ground, the other wing would fight the Germans and Ottomans in the air. The most valuable bombing target was the Hejaz Railway that transported Ottoman troops, supplies, and guns from Syria towards the garrisons in Saudi Arabia and Palestine. Its biggest weakness was that it relied on its tracks, which made it vulnerable to sabotage and enemy attacks, especially from the sky.

The Palestine Brigade not only broke the Levant Corps by destroying many of its planes, it flew many attacks on the railway itself, crippling the Ottoman war effort. At the Battle of Megiddo in September 1918, the Brigade destroyed a huge column of Ottoman troops on their retreat in one of the most devastating air-to-ground attacks of the war.

Retrieved from "https://battlefield.fandom.com/wiki/Planes_Above_the_Sand_(Codex_Entry)?oldid=343402"
Community content is available under CC-BY-SA unless otherwise noted.