"The hard-hitting DMRs and SRs the professional has can be used to secure an objective from a distance, while his rapid-fire sidearm can be used close-in. The camera and LTMs can help the pro survive being flanked and ambushed, and can be used tactically to defend objectives to assist his team. In addition, stealth training lets the pro get up close and personal, getting the drop on unsuspecting enemies."

Professional is a kit set to be featured in Battlefield Hardline. It is similar to the Recon kit featured in previous Battlefield installments and has access to the bolt-action sniper rifles, the semi-automatic designated marksman rifles, and the fully automatic machine pistols, along with reconnaissance and stealth equipment. The kit is suited for long-range engagements, spotting enemies for their teammates to attack, and creating defensive positions.

The weaponry the Professional has access to, the sniper rifles and designated marksman rifles, are better suited for taking on enemies from long-range due to their low rate of fire, high accuracy, and their high damage against enemies, especially to the head. To give them a chance of survival at close-range, they are equipped with machine pistols, which have a high rate of fire compared to the handguns available to the other kits.

The Laser Tripmines the Professional has access to allows them to create defensive positions, either for themselves or for the objectives, as they serve to block enemies from going through without getting killed.

The Camera automatically spots enemies in a 90 degree cone in front of it, giving players a way to perform reconnaissance from different spots and without having to keep pressing the Spot button.

The Decoy is a gadget that its main purpose is to distract the enemies by putting in fake enemy indicators on their minimaps, which may keep them from going to the area it is placed in and/or keeps the enemies pre-occupied with looking for your non-existent teammates on the minimap, allowing you and/or your actual teammates to take them out with less risk.

The Stealth Training gadget allows players using the Professional kit to be stealthy as their footsteps will not be as loud as players from the other class or without the gadget, which is useful for flanking enemies as long as they don't spot the players using it. 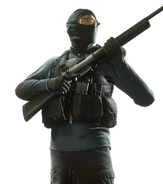 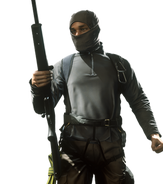 The Undercover Professional in the earlier build.

The Bangers Professional in the earlier build.
Community content is available under CC-BY-SA unless otherwise noted.
Advertisement