Projectile mechanics are a set of rules which apply to some (or all) projectile weaponry in the Battlefield series. Most of them are artificial representations of real-life laws of physics. This page catalogs those mechanics and their effects on the game.

In the Battlefield series, bullets, shells, grenades, and the like are represented as physics objects, rather than abstract concepts such as hitscans.

Travel time, also known as velocity is a representation of how quickly a bullet or shell moves through the air. All of the main Battlefield games, from Battlefield 1942 onward, possess velocity for all weapons. It is typically defined on a per-weapon basis, and determines how quickly the projectile will reach its target.

As a result of velocity, in order to accommodate for a target's movements a player will typically have to lead their target -- that is, aim ahead of the target's direction -- in order to successfully make contact. In close quarters, the target will be close enough that velocity will not affect hit probability.

In most games, bullets travel at a constant speed, while rockets and missiles have a slower initial speed and accelerate to a maximum speed. Battlefield 1 introduces drag as a factor, affecting long-range viability of many weapons.

Bullet velocity varies greatly among the range of infantry weapons. Generally, suppressed weapons have bullet velocity lowered below 340 m/s (the speed of sound), which makes the bullets themselves nearly inaudible. Non-suppressed weapons may travel significantly faster, and certain weapon classes can be identified by the sound of their bullets cracking in open air. In the few games where railguns are available, the extremely high velocity of its projectiles result in near-instantaneous impact.

When a projectile is set into motion, gravity pulls on the projectile at the same time as the momentum behind the projectile keeps it moving forward. The result is an arc-shaped trajectory.

The first Battlefield games lack bullet physics for all weapons but shells, rocket launchers, thrown weapons, and handguns. In the later games, standard projectiles as well as rockets and shells also suffer from projectile arc. In many games, the projectile physics concerned use the standard acceleration due to gravity, ~9.81 m/s2, for the calculation of bullet drop.

In Battlefield 1942, projectile physics are included only for shells, anti-tank rocket launchers, and thrown weapons. Although spread can give the sense of standard firearms having bullet physics, this is not an example of a projectile arc; tank shells and the Bazooka and Panzerschreck, however all have very noticeable arcs in their trajectory.

Projectile arc in Battlefield Vietnam remains the same as its predecessor's counterpart. Only tank shells and rocket launchers are afflicted by projectile arc.

In Battlefield 2, projectile arc is added to the series for small-caliber weapons: there is a considerable amount of bullet drop over long distances. Combined with the fact that there is always a small amount of spread with the sniper rifles, it can make predicting a bullet's long-range trajectory near-impossible at distances beyond several hundred meters, as the potential area in which the bullet may land increases exponentially with distance.

Additionally, rockets that are no longer being guided, tank shells, and grenade launcher grenades suffer from considerable arc in their trajectory, although it is not as difficult to predict their trajectory compared to the conventional firearms due to their lack of spread.

In Battlefield 2142, projectile arc mainly affects cannons (tank, Titan defense guns, Kz-27 turrets), mortars on the APCs, PK-74 AR-Rockets, and Clark 12-RDX rounds. Most infantry weapons in the game are fired at a high enough velocity that they experience little-to-no bullet drop at usual engagement distances. The only weapon class where drop can noticeably be observed is with the Recon's sniper rifles. Even then, only snipers using the DysTek Hi-Scope x4 at maximum magnification will notice significant drop.

The Engineer's basic main weapon (Mitchell AV-18 and Sudnik VP) experience drop when the rounds are not guided, while the SAAW 86 Anti-Air missiles experience drop and are slightly off target when not locked to a vehicle. Conversely the Pilum H-AVR has no drop with its projectile but has a slight chance for the round to go off target, even when fired when the player is completely still.

Rounds from the Rorsch Mk-S8 railgun experience no noticeable drop, as they are fired at extremely high speed.

In Battlefield Bad Company, projectile arc is present for both grenade launchers and tank shells (as well as the homing dart gun), though it is absent for conventional firearms.

Like the first Bad Company game, projectile arc for small-caliber weapons is once again absent. However, for tank shells and the rocket launcher, there is a noticeable, if considerably flatter in trajectory compared to the older games in the series.

In Battlefield: Bad Company 2, bullet drop is present for all weapons, including rocket launchers. While all weapons suffer from bullet drop, it is most prevalent with the Recon kit, due to the magnified scope magnifying the bullet drop when aiming. 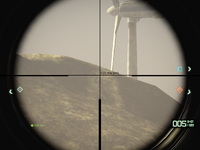 How much the player has to aim above head to achieve a successful headshot at ~150m. 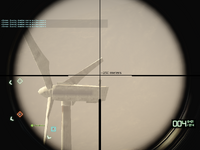 How much the player has to aim above head to achieve a successful headshot at ~250m.

Countering bullet drop is simple - players need only to guess the range of the target and then adjust the elevation of their shots carefully to negate the effect. Snipers are the easiest to do so with this, with weapons such as the M24 and the GOL having open sight reticles, making adjusting the shot easy, while the reticle for the SVU and the SV-98 are harder to use, but still potent.

On maps such as Laguna Alta and urban/woodland portions of most other maps, the typical ranges of combat make the benefits for adjusting for bullet drop negligible. If in doubt as to aiming a shot at medium ranges, players should usually avoid risk and aim directly for the head - doing so will usually result in a hit to the target's body, instead of the bullets sailing over the target's head if the range guess was wrong.

Bullet drop returns again in Battlefield 3. It is much more noticeable this time around due to the large maps like Operation Firestorm and Caspian Border, and the ability of the Frostbite 2 game engine to draw much further than the Refractor engine last used in Battlefield 2142. Players can also see their own bullet tracers.

In Campaign and Co-op, enemies are rarely encountered at ranges where bullet drop would affect small weapons. Tank shells notably ignore gravity in the single player campaign, as can be seen in the mission Thunder Run.

Scopes used on in-game firearms may not reflect their real-world use. Actual weapon sights are "zeroed" on a point a set distance away (e.g. 300 meters) where projectiles from the weapon are expected to cross. The scope is thus pointing slightly downward from the axis of the gun barrel. Inside of the zeroed distance, the projectile is slightly higher than the scope's axis, a trivial matter given the size of the target.

The pull of gravity is exaggerated for most non-Recon weapons, at 15 m/s2, causing these weapons' bullets to fall sooner.

In game, when aiming down sight or in a vehicle, the game engine actually emits the projectile from the scope, ensuring that the weapon will impact on target regardless of the position of the barrel (which may be clipping through an object). The projectile's initial motion is parallel to the scope's axis.

Bullet drop returns in Battlefield 4 and functions similarly to its predecessor Battlefield 3, but incorporates adjustable zeroing for Sniper Rifles and DMRs, as well as fixed zeroing on the SMAW and RPG-7V2.

Rangefinders are also introduced, helping players further counteract bullet drop. Rangefinders will let them know the exact range to their target, allowing them to accurately adjust or zero their scope.

With the addition of projectile drag in Battlefield 1, bullets and shells from most weapons now have a more pronounced drop towards the end of their flight. The drop is easily noticed on high-caliber shells, where elevating the barrel may only provide a few more meters of range. This places a hard limit on the effective range of these weapons. Bullets for Scout weapons have much less drag and high velocity, making them ideal for long range use.

Mortar shells do not have drag, and so continue to fly in a parabolic arc (as they did in Battlefield 4).

Retrieved from "https://battlefield.fandom.com/wiki/Projectile_mechanics?oldid=352521"
Community content is available under CC-BY-SA unless otherwise noted.