Putilov Garford Armored Car is a Codex Entry featured in Battlefield 1, introduced in the Battlefield 1: In the Name of the Tsar expansion. It is unlocked upon obtaining ten kills with the Putilov-Garford. 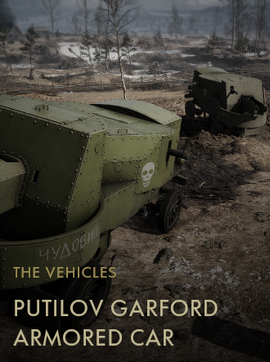 In production since March 1915 by the Putilov Armament Works, this armored car was designed to fit on a chassis built by the Garford Motor Truck Company. It was armed with a single 76.2 mm mountain gun in the front and a 7,62 Maxim machinegun on each side. With armor up to 6,5 mm thick, the cars provided good cover against small arms fire and were agile enough to act as mobile support batteries. However, the underpowered 4-cylinder 30 hp engine allowed for speeds of only 10 mph (16 km/h) even on good roads, and the front heavy car was of limited use on rough terrain, since its weight of 8.5 tons dragged it down. Still, it was very popular because of its shock factor and firepower. 48 were built in total and they saw service all over the Eastern Front; some being captured by the Germans, Poles, and various Baltic factions that would see further action in postwar struggles.

Retrieved from "https://battlefield.fandom.com/wiki/Putilov_Garford_Armored_Car_(Codex_Entry)?oldid=343298"
Community content is available under CC-BY-SA unless otherwise noted.