The QBB-95 (Chinese: 轻武器步枪班用一九九五 Qīngwuqi Bùqiāng Bānyòng, 1995; English: Light Weapon, Rifle, Squad based, 1995), or the Type 95 LSW (Chinese: 95式班用步枪 95 Shì Bānyòng Bùqiāng; English: Type 95 Squad Rifle), is a Chinese light support weapon designed in 1995 by Norinco, based on the QBZ-95 assault rifle. It uses the 5.8x42mm DPB87 cartridge. It typically uses 75-round drum magazines, although the standard 30-round box magazine is also available. It has a rate of fire around 650 rounds per minute and has an effective range of 600 meters.

"The Type 95 is the light machinegun version of the Type 95 carbine. It uses the same ammunition but has a slightly longer barrel and is drum-loaded."

The Type 95 is a light machine gun featured in Battlefield 2, issued to the People's Liberation Army Support Kit. When prone, the Type 95 has medium accuracy over distance (which rapidly deteriorates with extended automatic fire), and delivers decent damage. It carries a hundred-round magazine and has a short reload period when compared to the other weapons in its class. However, its MEC counterpart bears superior spread and damage, while its USMC counterpart is superior in terms of spread.

It can also be found as a mounted weapon in some maps, with infinite ammo and high accuracy. It is also mounted on the PLA version of the FAV. However, the mounted version has no iron sights, and is prone to overheating.

The QBB-95 in Battlefield 2

The mounted Type 95 HUD in Battlefield 2

A Type 95 mounted on a concrete barrier 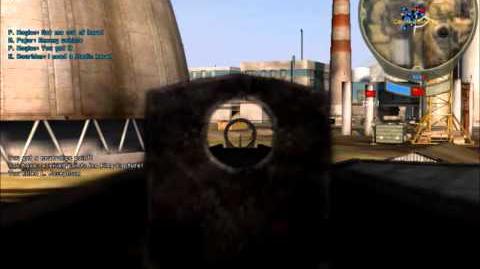 After completing the "Let It Rain" assignment

http://symthic.com/?s=bf3Retrieved Oct. 7
http://www.ign.com/wikis/battlefield-3/QBB-95
"Light machinegun designed in China and used by the PLA."

The QBB-95 is part of the Back to Karkand expansion along with 9 other weapons. It has a rate of fire of 650 rounds per minute and a drum magazine of 75+1 rounds. It has a fairly controllable amount of recoil due to its low fire rate in addition to having a burst fire mode. It can be unlocked by finishing the assignment "Let It Rain". When initially unlocked, it came with an extended mag, a bipod, and a ballistic (12x) scope. The ballistic scope, extended mag and PKS-07 were removed in the March 2012 update, but the extended mag and the PKS-07 returned in the September 2012 patch.

The bipod attachment features a unique and slightly faster deploy time. The AUG A3, along with the QBB-95, has the highest muzzle velocity of any weapon, even besting the M98B, at 670. Compared to its closest counterpart performance-wise, the QJY-88 LMG, the QBB-95 has slightly higher initial and subsequent recoil, less spread, lower default magazine capacity, faster muzzle velocity and a significantly faster reload. 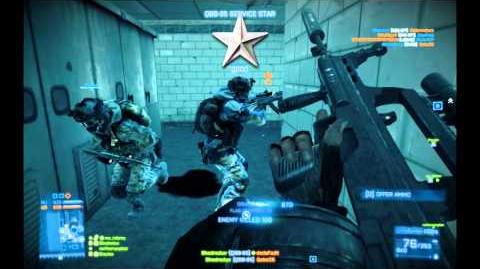 The QBB-95 in Battlefield Play4Free is a bullpup LMG for Medic class. It features a 60-round drum magazine with 180 rounds in reserve, very good damage, poor deviation (manageable via attachments), controllable upward recoil but it has horizontal recoil similar to the FAMAS for the Assault class. It fires at 900 RPM and is available for 2499 Battlefunds.

The QBB-95-1 is a weapon featured in Battlefield 4.

The QBB-95-1 is an unlockable weapon unlocked by completing the Silver assignment in Singapore by scoring 15,000 points. It is equipped with a Prisma and Laser Sight. It features a Worm Autumn pattern.

The QBB-95-1 is a Light machine gun for the Support class. It is somewhat of a middle ground between belt-fed LMGs such as the Type 88 and LSAT, and magazine-fed LMGs like the U-100 MK5.

It has the same rate-of-fire as the QBZ-95-1, and similar handling. It is the only bullpup LMG, aside from the L86A2, giving it superior mobility. However, its low fire rate and average damage means it may take longer to drop an enemy than other LMGs such as the M249 SAW.

Its main advantage is the highest stability in its class, making it possible to use similar to an Assault Rifle, but with a high capacity for extended suppressive fire.