Not to be confused with the similarily named QJY-88

The QBU-88, or Type 88, is a Chinese-made bullpup semi-automatic marksman rifle designed in the late 1980s by Norinco. By the first decade of 2000s, it was deployed in increasing numbers by the Chinese People's Liberation Army primarily among 1st grade mechanized outfits. It replaced the local copy of SVD, the Type 85 rifle. In addition to military arm, the Chinese People's Armed Police Force as well as some local police forces adopted the QBU-88 as part of their sharpshooter's arsenal as well.

The rifle uses the 5.8x42mm DBP88 cartridge from a 10-round box magazine with an effective range of 800 meters.

"The Type 88 is a member of the same family of guns as the Type 95 rifles. It fires a similiar

type of 5.8mm ammunition. It is semi-automatic and loaded from a 10 round box magazine." — In-game description

The Type 88 is a weapon featured in Battlefield 2 and is the standard Sniper Rifle for the People's Liberation Army in the game. It has lower damage than the MEC's SVD, but it has higher accuracy. A Type 88 will kill unarmored infantry in 3 hits, while an armored soldier may take up to 4 hits at times. A headshot will provide an instantaneous kill.

The Type 88 DMR is a weapon featured in Battlefield 2: Modern Combat and is the standard sniper rifle issued to the PLA Recon Kit. It has high firepower and good accuracy, but a low rate of fire.

Long
"Chinese marksman's rifle designed in the late 1980s. It features iron sights but is usually equipped with a 4x scope. Used by the PLA and Chinese police forces. "

It is a semi-automatic sniper rifle and takes about 3-4 shots to take down an enemy through body shots. It has a 10 round magazine and 40 rounds in reserve. However, unlike the SVU, the QBU-88 has no suppressor, which can easily give away the position of a sniper.

The QBU88 in Battlefield: Bad Company at Par for the Course.

The QBU-88 being reloaded in Battlefield: Bad Company on the multiplayer level Ascension.
Add a photo to this gallery

[1]
"The Type 88 is a new Chinese automatic rifle used as a marksman weapon rather than a sniper rifle. Able to employ various optics, the weapon has backup iron sights and a 10 round magazine."

The Type 88 is a weapon featured in Battlefield: Bad Company 2.

The Type 88 Sniper is the default weapon in Upriver. It can also be found with a Red Dot Sight on Heart of Darkness after the first weapon crate drops next to a building, and being used by an enemy in "Crack the Sky". Both variants of it are Collectible weapons.

It is one of the two snipers in the Singleplayer game, the other being the M95. However, both snipers can kill in one shot to the body, and as the Type 88 is semi-automatic and has a 10 round magazine, it has a superior rate of fire.

The Type 88 Sniper is the second sniper rifle issued to the Recon requiring 1300 points. It is semi-automatic, and therefore has a significantly higher rate of fire than bolt-action sniper rifles, but is balanced by the fact that it is less accurate, has higher recoil and deals less damage (headshots are not one hit kills unless using Magnum Ammunition and other shots require a few hits) than the bolt-action sniper rifles.

The weapon can also be modified with a Red Dot Sight, a 4X Rifle Scope, 12X High Power Scope, and/or Spotting Scope. It has exactly the same stats as the SVU, except in terms of reload time. However, the recoil pattern on the SVU is significantly longer than that of the Type 88, making it easier for the Type 88 to put the second/third killing round on target.

The Type 88 Sniper at Laguna Alta in Squad Rush.

The view through the Type 88 Sniper's scope.

The furthest an enemy can be for the Type 88 Sniper to do its highest damage at 8m.

The closest that an enemy can be for the Type 88 Sniper to do its lowest damage at 64m. 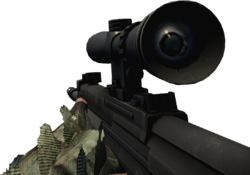 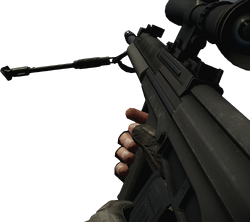 After completing the "Specops" assignment

The QBU-88 is a weapon introduced in the Battlefield 3: Back to Karkand expansion and is unlocked upon the completion of the Specops assignment.[2] It holds 10+1 rounds per magazine.

There was a glitch where the weapon would appear at the top of the screen with the player's arms stretched out, blocking the player's view. While you could ADS to remove the weapon and zoom in, there was no indication of where the bullet would land and no scope. This glitch only happened on the Back to Karkand expansion maps, but was patched in a recent update.

The weapon also suffered a glitch when deployed with the bipod. The weapons sights, including irons, were wrongly placed, aiming lower than the real bullet point of impact. This has been fixed during the patch 1.07.

The QBU-88 from Back to Karkand trailers.

QBU-88 with no optics

The QBU-88 appears in Battlefield 4 as an unlockable DMR for all kits.

Retrieved from "https://battlefield.fandom.com/wiki/QBU-88?oldid=229910"
Community content is available under CC-BY-SA unless otherwise noted.