The weapon uses a proprietary 30 round magazine, has a rate of fire of around 650 rounds per minute and an effective range of 400 meters, with a maximum range of 600 meters. It also has a specialized and optional 4x telescopic sight. Variants of the weapon include the QBB-95 light support weapon and the QBZ-95B carbine.

The Type-95 is a weapon featured in Battlefield 2: Modern Combat and is issued to PLA Assault soldiers. It has a moderate rate of fire, a 30-round magazine, high damage and good accuracy. It can kill in a single head shot and is effective as a sharpshooting weapon with Y/MA 95 scope. It also has a Type 91 underbarrel grenade launcher attached to it. Blind firing for head shots and the grenade launcher can easily dispose of a large group of enemies.

The QBZ-95-1 is an assault rifle featured in Battlefield 4.

The QBZ-95-1 is the standard rifle of the PLA. It features an HD-33 alongside a Magnifier and Compensator. It sports a Hexagon Naval paint. Completing the To Valhalla assignment unlocks it for multiplayer.

The QBZ-95-1's handling is very similar to the L85A2 from Battlefield 3, having the same low firerate of 650 RPM. It has easy to use iron sights, low recoil and good accuracy, making it an effective all-around weapon. Its stats sit between the SAR-21 and the AUG A3.

Being a Chinese assault rifle, it unlocks the Chinese attachments and gets the US and Russian ones from Battlepacks.

The QBZ-95-1 is one of the four bullpup assault rifles that can equip an underbarrel grenade launcher, the other three being the AUG A3, L85A2 and the SAR-21. However, it cannot equip the M26 MASS underbarrel shotgun. 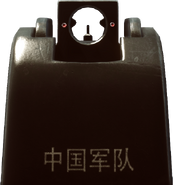