The QBZ-95B is a shortened carbine variant of the Chinese QBZ-95 assault rifle. Its shortened barrel length improves portability and handling, at the cost of effective range. It is in use by vehicle crewmen, naval crew, and special forces within the Chinese PLA.

"The Type 95 carbine is the latest addition to the PLA armory. It is a light-weight, air-cooled assault rifle built of polymer materials which fires 5.8mm rounds from a 30 round magazine."

In Battlefield 2, the QBZ-97 is the standard primary weapon of the PLA Special Forces kit. Like the SCAR-L, the QBZ-97 possesses a spread modifier for prone, as well as crouching and standing, though instead of being less accurate than the minimum, the QBZ-97 in prone has the same spread value as when the weapon is zoomed. It lacks an optic, but it does have the lowest spread values out of the carbines, and has relatively low visual recoil values.

The QBZ-97 in Battlefield 2

After completing the "It Goes Boom!" assignment

The QBZ-95B is a weapon introduced in the Battlefield 3: Back to Karkand expansion and is unlocked upon the completion of the It Goes Boom! assignment.

Due to its short length, it cannot be equipped with a bipod. The weapon has a foregrip already attached, and after the March 2012 patch, this properly affects weapon handling. The weapon itself is quite accurate and has a small crosshair. Its damage is comparable to most other carbines, but has one of the longer reloads.

Aiming down the QBZ-95B's iron sights

Left side of the QBZ-95B

The Type-95B-1 is a carbine featured in Battlefield 4.

The Type-95B-1 is unlocked with 83,000 Carbine score. It is similar to its bigger brother, the QBZ-95-1, differing only in its muzzle velocity, which is lower. It features the highest stability stats of the Carbines, however its low rate of fire makes it suffer in close quarter battles but better at medium range. Its bullpup nature allows for a slightly greater hip fire accuracy than most other carbines. The sights are clear, identical to those of the QBZ-95-1. 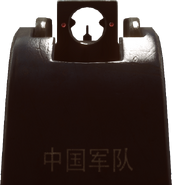