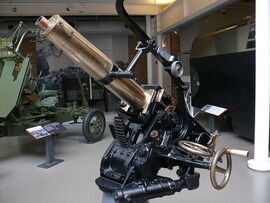 The QF 1-pounder (Quick Firing) was the first autocannon, developed by Hiram Maxim of Great Britain. Also known as the "pom-pom" due to its iconic sound, it served as an anti-infantry and anti-aircraft weapon. It was fielded by many nations during World War I, including the German Empire and the United States, as well as their respective navies.

This item has a Codex entry: QF 1 Pom-Pom

The QF 1 AA is an emplaced anti-aircraft gun featured in Battlefield 1.

In Friends in High Places, where Clyde Blackburn uses one on the top of a German Airship L30 to fight off a vicious assault.

In Avanti Savoia!, Luca Vincenzo Cocchiola assumes control of one to fight off an Austro-Hungarian air strike before they fixate on his brother's squad's position.

The QF appears on Ballroom Blitz, Fao Fortress, Monte Grappa, Sinai Desert and St. Quentin Scar, all of which have the possibility of spawning aircraft.

It is a devastating piece of anti-air weaponry and one of the more effective ground-to-air weapons against the Airship L30. Using explosive flak rounds, it can easily damage any aircraft within range, and a direct air-to-ground counterattack would be difficult due to the intense shaking caused by the explosions. It also can be used effectively against infantry.

The gun lacks physical shielding and leaves the gunner exposed while using it. It is also not very effective at eliminating tanks or destroying structures.

The QF 1 AA can also be equipped via the Armored Anti-Aircraft Package for the Artillery Truck, and mounted on the C-Class Airship, but both have less range than their stationary counterparts.

Destroyed Front
Add a photo to this gallery

Retrieved from "https://battlefield.fandom.com/wiki/QF_1_AA?oldid=371819"
Community content is available under CC-BY-SA unless otherwise noted.