The QF 1 Pom-Pom is a Codex Entry featured in Battlefield 1. It is unlocked upon obtaining 10 kills with the QF 1 AA. 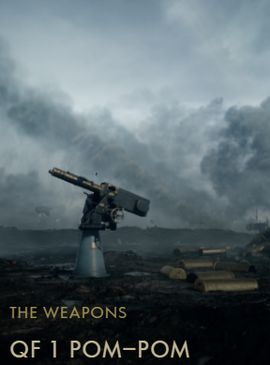 A 37mm British automatic quick firing cannon. At first, it was turned down by the British government, but when it was used against British soldiers in the South African War of 1899-1902, it was quickly adopted. It was initially used against infantry and in defensive positions on ships against torpedo boats. As the war progressed, it was converted for high-angle shooting and became one of the more successful anti-aircraft weapons.

It is known as the "Pom Pom" due to the sound it makes while firing.

Retrieved from "https://battlefield.fandom.com/wiki/QF_1_Pom-Pom_(Codex_Entry)?oldid=343266"
Community content is available under CC-BY-SA unless otherwise noted.