The QJZ89 is heavy machine gun used by the People's Liberation Army. It fires the 12.7x108mm cartridge, and is either used as a vehicle-mounted weapon, or as an infantry weapon manned by teams of three.

The QJZ89 is featured in Battlefield 4 as the armament for the LYT2021, and functions as the Chinese equivalent to the American M2 Browning and Russian KORD. 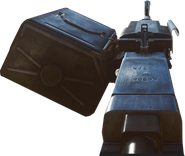 QJZ-89 as mounted machine gun aboard the LYT2021
Add a photo to this gallery
Retrieved from "https://battlefield.fandom.com/wiki/QJZ89?oldid=362968"
Community content is available under CC-BY-SA unless otherwise noted.