Battlefield Wiki
Register
Don't have an account?
Sign In
Advertisement
in: Standard, Pistols, Weapons of Battlefield 2,
and 2 more

The QSZ-92 is a semi-automatic pistol designed by Norinco, a well-known Chinese manufacturing firm. It can be chambered in the Chinese-made 5.8x21mm round or the common 9x19mm Parabellum round; the latter version is more commonly made for exports.

Game files
"The QSZ92 is a recoil-operated semi-automatic pistol built for the PLA. It fires 5.8mm ammunition and has 15 shots in a clip."

The QSZ-92 is a weapon featured in Battlefield 2, issued to the PLA. Its stopping power and accuracy are identical to that of other handguns in the game. Its magazine capacity is 15 rounds, its spread values are average, and its rate of fire is three-hundred rounds per minute -- identical to that of the MEC's MR-444 and American 92FS. There is also a suppressed version issued to the Special Forces kit and Sniper kit, which is statistically identical to the unsuppressed version.

The silenced QSZ-92 in Battlefield 2.

Low
The QSZ-92 is a weapon featured in Battlefield 2: Modern Combat, issued to all PLA kits as the standard sidearm. It has decent firepower and mediocre accuracy, but a moderate rate of fire. As with all pistols, the Sniper and Special Ops kits use suppressed variants.

0.2
15
The QSZ-92 is a sidearm featured in Battlefield 4. It is unlocked at 8000 pistol score. It is the first semi-automatic handgun unlocked with a different ammunition type and magazine capacity (the P226 and M9 both being 9x19mm with 16 rounds per magazine max).

The weapon deals 5 less damage at close range than most of the 9mm handguns, but has the same minimum damage. The weapon therefore requires, to kill an enemy at full health and with no attachments in effect, an absolute minimum of three rounds at close range, and an absolute maximum nine rounds.

With a suppressor, the QSZ-92 sees increased spread, as well as markedly decreased velocity (220 with the suppressor versus 340 without).

The QSZ-92 is statistically very similar to the FN57, with the same magazine capacity, spread, damage, and rate of fire, but is slightly inferior to the FN57 in terms of velocity, and reload speed. Its recoil is less intense upwardly, but more intense side-to-side than the FN57's. 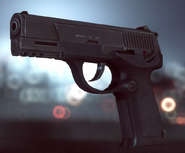 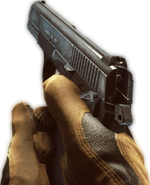 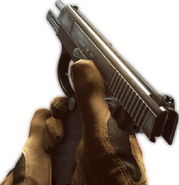