"The ATV is an understated but versatile battlefield presence. The compact size of this one-person, four-wheel-drive cycle allows it to navigate obstacles that might stop larger profile vehicles."

The ATV is a lightly armored one man transport vehicle that appears in the Special Forces expansion pack for Battlefield 2. It can be used to quickly reach objectives and capture them. Since it is has hardly any armor, it is extremely easy to be killed when riding one.

The driver's seat of the ATV from the first-person perspective.

"An Ultra-light Tactical Vehicle used in combat, reconnaissance and logistic support. It allows 2 individuals to increase their mission effectiveness by assisting in moving over any terrain, in all weather and at any altitude."

The Quad Bike is a vehicle featured in Battlefield: Bad Company 2. It is a very fast, lightly-armored transport which can be used to carry a driver and a passenger to the frontline or into enemy territory. It is the equivalent of the Golf cart from Battlefield: Bad Company and is useful for initial rushes as well as reaching far-off objectives quite quickly. Due to its low health and armor, it can easily be destroyed by a single projectile fired from most explosive weapons. A hard crash into an obstacle may also be enough to cause the Quad Bike to blow up if it has already sustained considerable damage.

The driver and passenger are both very exposed as well and can easily be targeted by enemy players. The passenger faces backwards and can provide support with their Kit's weapons against targets, however, this can prove difficult if the bike is going at full speed and/or making sharp turns. Despite these weaknesses, it is nonetheless a dependable transport for flanking maneuvers, which can quickly drop players into an enemy base. It is also very useful for players who wish to ambush the opposing side, due to its speed and agility allowing it to quickly move from place to place, setting up ambush points once in position. It is also a popular vehicle for Roadkills due to its speed, as enemies are often caught unaware and can easily be taken out before they have a chance to react.

Each kit can also benefit from using the Quad Bike effectively. Assault players, for instance, can use the Quad Bike's speed to quickly resupply team-mates all over the map, switching to the passenger's seat to drop ammunition boxes when needed, while an Engineer can use the Quad Bike as a mobile repair vehicle, backing up to a damaged vehicle and repairing it from the damaged seat. Medics can also use the Quad Bike to drive around the battlefield and revive/heal teammates, while Recon players can use it to move to new positions to support an advance or hide from other snipers.

The Quad Bike is very useful in all game modes, especially Rush. Because of its speed, attackers can use it to quickly break through enemy defenses, even to the point that the game has just started. especially so at the start of a game and during the point(s) when the next set of M-COM stations are revealed. It is advised though to not use direct routes to objectives and to go around to them to lower chances of being killed by an anti-tank mine or gunfire. In Conquest, the Quad Bike is hugely useful for reaching and securing flags quickly, especially when one side has the opposing team trapped in their deployment zone. Like Rush, it is once again advised not to use direct routes to the flags and to go around them to objectives unless absolutely necessary. This is even more important because of the increased number of vehicles on both sides.

A Quad Bike being used by a Recon soldier in Onslaught 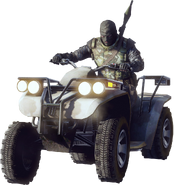 The Quad Bike returns in Battlefield 3 as one of three new vehicles in the Armored Kill expansion. It was first revealed at E3 2012 in the Battlefield Premium launch trailer during the EA Press Conference. It was released in Armored Kill in September 2012 where it displays similar characteristics to the iteration in Bad Company 2. It features two seats with the passenger able to use their weapons to fire at enemies from the rear. While being fast and agile, it suffers from weak armor. All explosives can instantly disable or destroy the Quad bike; however, its fast speed can make for car bombing and quick transport. Care should be taken however as at top speed the Quad Bike will explode instantly if driven into any solid object.

The HUD of the ATV in Battlefield 3. 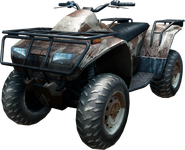 The Quad Bike is a vehicle featured in Battlefield 4. It was first shown before the game's release in the Only in Battlefield 4: "How to Fly an ATV" Trailer. It holds the same functions as past variants, featuring little to no armor, allowing for it to easily be destroyed and leaving the driver and passenger heavily exposed. It is one of two vehicles along with the Dirt Bike which can ride the elevators in maps like Dawnbreaker or Siege of Shanghai.

A 3rd person view of a Quad Bike in Test Range.

Front view of a Quad Bike.

Back view of a Quad Bike.

The Polaris Sportsman quad bike appears in Battlefield 2042 as a neutral vehicle. It function in a similar manner to past installments, allowing up to one passenger. The vehicle may be found across several maps such as Orbital or Renewal.

It is prominently featured in the "Official Reveal Trailer" and "Official Gameplay Trailer" as a ramming vehicle and C5 Explosive conveyance.