The Queen of the Battlefield is a Codex Entry featured in Battlefield 1. It is unlocked upon obtaining ten kills with the Heavy Machine Gun. 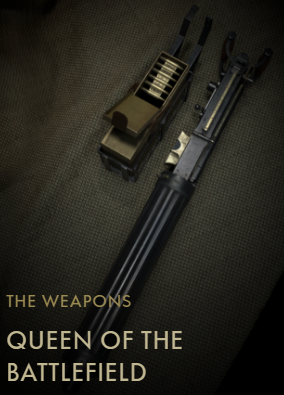 Machine guns were quite heavy and limited in numbers at the outbreak of the war, but they proved excellent defensive weapons. They could literally fire uninterrupted for days due to their water cooling system. The machine gun's ability to quickly take down enemies in great numbers changed the face of modern war forever. It was the weapon that favored the defender, turing the nature of war into attrition, and as a result creating new problems to be solved.

Special machine gun corps were formed, gathering all expertise and perfecting the use of the machine gun beyond its initial capabilities. New tactics were developed that allowed the machine gunner to fire safely over friendly troops and hit targerts beyond what the gunner could see. This literally turned the machine guns into miniature pieces of artillery. British soldiers became accustomed to the sound of whizzing bullets passing overhead as they prepared to strike the enemy.

Retrieved from "https://battlefield.fandom.com/wiki/Queen_of_the_Battlefield_(Codex_Entry)?oldid=343184"
Community content is available under CC-BY-SA unless otherwise noted.