"I do not want a Bin Laden style resolution here."

— Cole about the capturing of Faruk Al-Bashir

Captain Quinton Cole is a character in the single-player campaign of Battlefield 3. He is the Commanding Officer of the Misfit units, or Misfit Actual.

Being the leader of the Misfit units, Quinton Cole is in charge of most of the US Marines in the game, including the protagonist Henry Blackburn. He was first met briefing the squad in the mission, Operation Swordbreaker, He also led assaults in Iran during Operation Guillotine, Night Shift, and in the undeclared war between the United States and Russia in Rock and a Hard Place, and finally, up to his final appearance and death in the mission, Kaffarov.

During Kaffarov, Cole is shot and killed by Blackburn, under the request of Dimitri Mayakovsky, for the greater good. This then lands Blackburn in hot water with the American government for killing his Commanding Officer.

As heard on the capture mission Night Shift, Quinton Cole is referred to by Campo as being a "gloryhound", who would do anything to gain a promotion due to the length of time he had been a Captain, such as demanding Campo and Blackburn to keep Faruk Al-Bashir alive at all costs to increase his prestige.

Cole is also shown to be blinded by his strive for glory as he ordered his unit to take on a Russian VDV battalion in Rock and a Hard Place. The move was considered suicidal by his unit since they were outnumbered.

Indeed, a majority of the Misfit unit was taken out of commission before they reached Kaffarov's villa. He seems undeterred even when Matkovic and Campo are killed during the mission Rock and a Hard Place, although he seems somewhat remorseful at their deaths, and his fellow Marines' reactions. 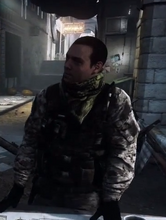