The RAC Armored Car is a Codex Entry featured in Battlefield 1. Describing the Romfell Armored Car, it is unlocked upon obtaining fifteen kills with Armored Cars. 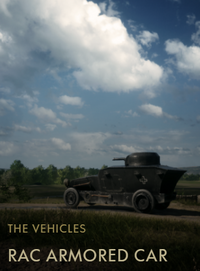 Austria-Hungary was late in the competition for armored vehicles, and they would face both Russian and Italian forces who already had armored cars. The reaction, even though late, would be a remarkably modern and elegant design with its curved shapes, a turret armed with a heavy machine gun, and it also came with a wireless morse telegraph. Very few were built.

Retrieved from "https://battlefield.fandom.com/wiki/RAC_Armored_Car_(Codex_Entry)?oldid=343294"
Community content is available under CC-BY-SA unless otherwise noted.