The MAARS is depicted in Battlefield 4 as the RAWR (Remote Assisted Weaponized Robot).

The RAWR is a Battle Pickup featured in the Battlefield 4: Dragon's Teeth expansion. It is equipped with an M240 LMG, four M203 3GL launchers and a Flash Light, as well as Thermal and Zoom Optics.

Like all other Battle Pickups, the RAWR spawns at specific points on Dragon's Teeth maps, with its PDA resting on top of a crate labeled "RAWR". Once the PDA is picked up, the drone can be deployed and operated. Something to note, however, is that if the player switches to another weapon while the drone is deployed, the PDA will disappear and the RAWR will become unusable. If the drone has not yet been deployed, however, then the PDA will simply fall to the ground and can be picked up again.

Although the drone has considerable firepower with its weapons and has a large amount of health, it can be dispatched fairly quickly if it's attacked by multiple enemies, especially if explosives are employed. It can also be easily identified by the bright yellow light on its antenna and its forward-facing flash light, making it difficult to not be spotted. In order to be most effective, it's recommended to take on only small groups of enemies while working alone and to try and flank unaware enemies when possible. Working with teammates is also a good idea, as the RAWR can also be a considerable force multiplier while supporting friendlies. As well, it can also be actively repaired by an Engineer or EOD Bot, making it even more of a better idea to stick around allies.

Unlike most other gadgets and vehicles, the RAWR cannot reload its weapons, so conservative use of ammunition is necessary to make the most of its firepower.

The HUD for the M240B machine gun 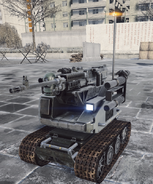 The RAWR on Propaganda

The RAWR's PDA on top of its crate