The RFB (Rifle, Forward-Ejection, Bullpup) is a gas-operated semi-automatic rifle, manufactured by Kel-Tec Industries of Florida. The rifle is fully ambidextrous and is chambered for the 7.62x51 NATO/.308 Winchester cartridge. The RFB has a unique forward ejection system which gives it its name; spent casings are ejected into a tube over the barrel and then gently dropped out of an opening near the muzzle. The RFB Hunter variant features a 24" stainless steel barrel.

0.3
15
The RFB is a DMR featured in Battlefield 4. It is available to all classes as an All Kit Weapon.

The RFB is the first DMR unlocked after obtaining 12,000 points while playing as the Recon kit. As with the QBU-88, it features an improved hipfire compared to other DMRs, as well as reasonably high accuracy.

Before the Fall patch, these advantages were counterbalanced by the lowest velocity of all DMRs at 460 m/s, after the SKS' 440 m/s.

After the Fall patch, the velocity has been increased to 600 m/s, making the RFB more viable as a long-range weapon, though the RFB is limited to low-power scopes as with all DMRs. 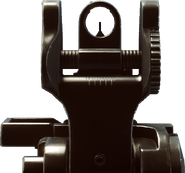 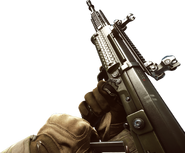 The RFB as seen with a Reflex sight and a Magnifier.