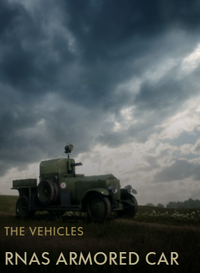 The RNAS, standing for the Royal Navy Air Service, saw an early need for a highly mobile armored platform. This car saw action on many theaters of the war and was particularly effective on fronts where the terrain could provide for its speed.

Lawrence of Arabia famously dubbed these cars "more valuable than rubies". It wasn't a tank, but it was bulletproof against rifle fire, and perfectly suited for the hit-and-run tactics favored by the Arab Rebellion in the vast deserts.

Retrieved from "https://battlefield.fandom.com/wiki/RNAS_Armored_Car_(Codex_Entry)?oldid=343289"
Community content is available under CC-BY-SA unless otherwise noted.