For the carbine variants, see RO933
The Mark 12 SPR (Special Purpose Rifle; formerly Special Purpose Receiver) is an American Designated Marksman Rifle. Essentially a heavily modified DMR variant of the M16, the SPR was created due to requests for a special forces rifle with a greater range than that of the M4 carbine while still possessing a short barrel length. The SPR is about five inches shorter than the standard M16A4, and has an effective range of 500 meters. It is currently in use with United States special forces, particularly those of the United States Army and Navy, as well as having seen limited use by the United States Marine Corps.

The Mod 1 SPR appears in Battlefield Hardline as the RO933 M1, equipped with an A2 buttstock.

The RO933 M1 is a semi-auto Sniper rifle added in the Battlefield Hardline: Getaway expansion, exclusive to the Professional kit. 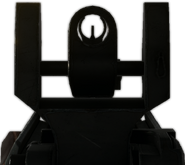