For the similar weapon see RPG-2
The RPG-7 (Russian: Ручной Противотанковый Гранатомёт, Routchnoy Protivotankovy Granatomiot; English: Hand-held anti-tank grenade launcher) is a Soviet, shoulder-launched, anti-tank, propelled grenade launcher designed in 1961 by Bazalt, and is the successor to the RPG-2. A weapon used for decades by Russia and the Soviet Union, the RPG-7 is manufactured in a number of variants by nine countries, and is now the most widely used anti-tank weapon in the world. It saw service during the Vietnam War, and more recently in engagements in the Middle East, Central Asia and Africa. It is used currently around 40 countries, and it is also popular with paramilitary and guerrilla forces. The RPG-7 and the RPG-2 both have shaped charges to increase effectiveness against armor.

The RPG-7V is a launcher featured in Battlefield Vietnam, issued to NVA and certain Viet Cong Heavy Assault kit. It is equipped with a scope that adds a slight zoom and helps greatly for accurate aiming. The RPG-7V has very high damage and an effective blast radius, but its long range capacities are difficult to manage as there is a noticeable arc in the rocket's trajectory. It can destroy any light vehicle in 1 rocket, helicopters in 2 rockets, APCs in 3 rockets, and tanks in 4 rockets.

The RPG-7V's scope
Add a photo to this gallery

[1]
"The RPG-7 can trace its lineage back to the WWII German Panzerfaust. Developed by the Russians in the early sixties, the RPG-7 family of rocket propelled grenade launchers remain an ever present danger in conflicts around the world"

The RPG-7 is issued to Rebel and Insurgent Anti-Tank kits in Battlefield 2: Special Forces. Compared to its counterparts, the ERYX and the SRAW, the RPG-7 has a much quicker reload speed, but cannot be guided once fired. Therefore, it is best to use the RPG-7 to engage stationary vehicles or turrets, and leading the target for moving targets. The rocket will also drop as it travels, so for distant targets, the player must compensate for this by aiming above the target. Being an unguided weapon, occupants of enemy armor will not be notified of your targeting them, unlike the SRAW and ERYX.

The RPG-7 in Battlefield 2: Special Forces.

The RPG-7's scope.
Add a photo to this gallery

The MEC Engineer kit is equipped with the RPG-7V Rocket Launcher. It has 1 rocket loaded and 4 spare rockets. It usually takes two or three rockets to destroy a tank with this launcher.

An MEC Engineer holding the RPG-7V.
Add a photo to this gallery

The RPG-7 is a launcher featured in Battlefield: Bad Company.

The RPG-7 is found in 4 missions: Welcome to Bad Company, Acta Non Verba, Crossing Over, and Air Force One. Generally, it can usually be found where a tank or a helicopter must be destroyed. Just as with other portable AT launchers, it can give the player a significant amount of firepower against any targets, be it vehicles, infantry, or buildings. In Welcome to Bad Company, it is first given as part of the mission, after capturing the first farm, the player can use one to destroy a BMD-3 that just popped out of the barn. In the second mission, it is first available at the eastern end of West Zabograd, the spot where the team regroups with the M1A2 Abrams, and the player can instead dash to that spot to get the weapon before proceeding to destroy the launchers if they feel like it. In the third mission, it is available near the start of the game, inside the house next to the street side Kornet launcher, and either weapon can be used to destroy the incoming T-90. Given the mission's heavy vehicular warfare, the player should either use the weapon or a Repair Tool. And in Air Force One, it can be first found at the outpost with the fuel silos. It is generally useless in this mission, considering the player has the helicopter's arsenal of unlimited rockets to wreak havoc on the enemy, and the amount of time the player has to proceed the mission on-foot is not significant.

The RPG-7 is the rocket launcher issued to the Russian Demolition Kit, and is the counterpart to the US M136 and the MEC M2CG. The RPG-7 only differs from its counterparts in the aesthetic and reload animation departments, with the stats being identical across all 3 weapons.

The RPG7 in Battlefield: Bad Company in the multiplayer map Ascension in Conquest mode.

The RPG7's scope
Add a photo to this gallery

The RPG-7 AT is a launcher featured in Battlefield: Bad Company 2.

The RPG-7 makes a very brief appearance. During the final cutscene of No One Gets Left Behind, when Flynn "Ghost Rider" is attacking members of the Latin American Militia, Kirilenko orders one of the militiamen to shoot an RPG-7 at Flynn, destroying his helicopter. It appears during the intro cutscene of Heart of Darkness when Flynn "Ghost Rider" dodges a shot fired from one. It also briefly appears during the final chase sequence in the mission Cold War, being held by a Russian soldier riding on the back of the third quad bike. It is never available to the player.

The RPG-7 AT is the first rocket launcher issued to the Engineer kit, requiring no experience points to unlock. It inflicts more damage against enemy vehicles than the M2 Carl Gustav in multiplayer, but also travels slower and falls more steeply over long distances. When combined with the extra explosives specialization, the user is given eight rockets in reserve and is able to destroy some buildings without the need for ammo resupply packs. Compatible with the tracer dart targeting system, the RPG-7 inflicts limited splash damage against soft targets.

The RPG-7 at Panama Canal in Squad Deathmatch.

The view through the RPG-7's scope.

Reloading the RPG-7.
Add a photo to this gallery

The RPG-7 AT is issued to the Engineer kit in Battlefield: Bad Company 2: Vietnam. It features its backup iron sights only, and is similar to the RPG-7 from the base game.

Also worth noting is that since the Tracer Dart Gun isn't in Battlefield: Bad Company 2: Vietnam, greatly reducing the effectiveness of the launcher on helicopters and other mobile targets, all infantry weapon fire has been enhanced to deal damage to the UH-1 Iroquois.

An US Engineer aiming the RPG-7

The render of the RPG-7. 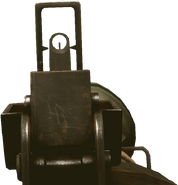 Iron sight render.
Add a photo to this gallery

Medium
"Rocket Propelled Grenade launcher delivers high explosive ordinance that is effective against all targets. The rocket will home in on any vehicle that is tagged with a tracer dart."

The Anti-Vehicle RPG is a gadget available for the Engineer kit in Battlefield Play4Free. It is the main anti-tank weapon, destroying a tank in 3-4 hits. The rocket descends somewhat after being fired, and using the Tracer Dart Gun increases the chances of hitting a target at longer distance, however a more skilled player will find it quicker just to compensate for the warhead dropping by aiming further up.

Its ammunition capacity can be increased with the training customization Increase RPG Ammo. The weapon is extremely weak when used against infantry due to the small blast radius. A shot from this weapon will need to directly hit an enemy to kill them, or to hit a surface a maximum of 2m away from the enemy to do any damage

The RPG-7 in Battlefield Play4Free.

The view through the RPG-7's scope.
Add a photo to this gallery

A render of the RPG-7 in Play4Free

The RPG-7V2 is a launcher featured in Battlefield 3.

The RPG-7V2 is the main anti-tank weapon used by the PLR. It is first encountered in Operation Swordbreaker and can be encountered multiple times during the campaign. It is used by VDV troops during Rock and a Hard Place. The weapon cannot be obtained by the player, however.

The RPG-7V2 is the default anti-tank launcher issued to the Engineer kit. Like its USMC counter-part, the SMAW, it also has a slightly ballistic trajectory. It stands opposite of, but performing near-identically to it also. By default, it is equipped with five rockets (one loaded plus four in reserve), or nine (one loaded plus eight in reserve) when equipped with the EXPL upgrade. It can disable a tank in two rounds, or destroy one with three. It will only require 2 rockets to destroy an MBT when fired at the rear of the vehicle at a direct 90 degree angle.

The RPG-7V2 is also capable of destroying walls and obstacles, creating splash damage to maim or directly kill enemy personnel. The RPG-7V2 can also be used against air targets, destroying Attack and Scout Helicopters as well as Jets of all types with a single rocket but only disabling transport helicopters, requiring 2 rockets to destroy it at any angle.

In game modes such as Hardcore where friendly-fire is by default enabled, operators of the weapon must take greater precaution, as the splash damage may injure or kill friendly personnel, especially when operated in close-quarter situations such as corridors, tunnels and doorways.

The following is a list of effects and damage to specific vehicle types from impacts by the RPG-7V2.* Vehicles not listed are vehicles which are instantly destroyed upon missile impact at any angle. Such includes Attack & Scout Helicopters, Jets of all types and Quad Bikes

*Note that the damage between the RPGV2 and its USMC counter-part, the SMAW are identical in damage output. 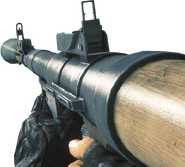 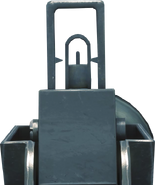 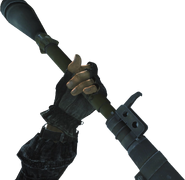 RPG-7V2 while sprinting.
Add a photo to this gallery

The RPG-7V2 is an available Rocket Launcher in Battlefield 4.

It can be equipped to either of the Gadget 1 and Gadget 2 slots, but the player cannot have a different launcher on the remaining gadget slot.

The RPG-7V2 inflicts the second highest base damage to vehicles out of all the anti-armor launchers (after the Javelin), but players may have a more difficult time using it due to the slower and arcing nature of the rocket; The RPG-7V2's iron sights are zeroed to 50 meters, meaning that projectile arc will become noticeable past that distance and the rocket will go slightly higher than the point of aim at shorter distances; Skilled players may even compensate for this by aiming ahead of moving targets.

It generally does 24-34% damage against heavy vehicles but, unlike the Javelin, it can inflict up to 59% damage by aiming for the lower back of a tank. This effectively allows to destroy an MBT in as little as 2 shots.

By default, it is equipped with 5 rockets with one in reserve, while increasing 7 rockets and one in reserve with the ROCKETS specialization.

In game modes such as Hardcore, where friendly-fire is enabled by default, the operator must take greater precaution, as the splash damage may injure or kill friendly personnel, especially in close quarter situations such as corridors, tunnels and doorways. 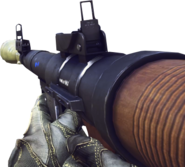 First-person view of the RPG-7V2 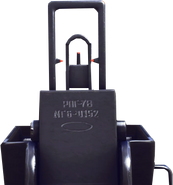 Reloading the RPG-7V2
Add a photo to this gallery

The RPG-7V2 is a Battle Pickup featured in Battlefield Hardline.

It can be found at various positions on the map. Players can also equip the weapon to a specific vehicle, placing the weapon in the trunk of that vehicle. To obtain it, players must take control of that vehicle and proceed to open its trunk.[3]

The RPG-7V2 being pulled out.

The RPG-7V2's iron sights. (Note the misalignment after firing.)

The RPG-7V2 being reloaded by a Criminal Enforcer (from the Thieves subfaction).

A Criminal Enforcer (from the Bangers subfaction) picking up the RPG-7V2 from the trunk of a car.
Add a photo to this gallery

Retrieved from "https://battlefield.fandom.com/wiki/RPG-7?oldid=363039"
Community content is available under CC-BY-SA unless otherwise noted.