For the newer variant in Battlefield 4, see RPK-12.
The RPK, or Ruchnoy Pulemyot Kalashnikova (Russian: Ручной пулемёт Калашникова; English: Kalashnikov hand-held machine gun) is a Soviet/Russian light machine gun, developed by Mikhail Kalashnikov in the late 1950s. It was put into service with the Soviet Army in 1961. Several countries have copied the design and were produced, as well as many others exported, especially after the Soviet Army replaced it with the RPK-74, which, it too was copied and exported, especially to African, Asian, Eastern European, and Middle Eastern countries.

"The RPK is a very efficient squad level light support weapon using small-caliber ammunition. Due to its high rate of fire, the RPK is most accurate when fired from a prone, stationary position."

The RPK-74 is a weapon featured in Battlefield 2 for the MEC's Support Kit. Like the other LMGs, it boasts relatively low spread while prone, although its standing and crouching spread are higher than most other classes of weapon, as well as relatively high damage and a longer than average reload cycle.

The RPK-74 also comes in a mounted versions on some MEC-related maps. Like the mounted M249 and QBB-95, the mounted RPK-74 has a high rate of fire and decent accuracy with virtually no recoil, as well as infinite ammo. It also has no iron sights and is prone to overheating.

It is the default weapon for the MEC Special Forces, Spetsnaz, Rebel Forces and Insurgent Forces in the Battlefield 2: Special Forces expansion.

A mounted RPK in Battlefield 2.

Rear side of the gun.
Add a photo to this gallery

[1]
"Designed to replace the RPD machine gun and standardize the Red Army small arms, this 7.62 light machine gun uses the same ammunition as the AKM assault rifle, but features an extended barrel and foldable bipod."

The RPK is a weapon featured in the Battlefield: Bad Company 2: Vietnam expansion for Battlefield: Bad Company 2 for the Medic kit. It is the equivalent of the PKM LMG in the base game, the only differences being appearance and the RPK's faster reload time. Like most weapons in the expansion, the RPK appears rusted and the receiver cover is held in place with cloth. DICE developers explained that it was a distinct art style for the weapons in the Vietnam expansion.[2]

It differentiates from the other two MG's by having a round drum magazine rather than a box with a belt of ammunition, and as such retains the LMGs' high capacity and has a quicker reload time. The RPK is between the M60 and XM22 for firing rate and recoil making it a balance between the high accuracy and damage of the M60 and the fast firing rate of the XM22. The weapon's iron sights are comparably clearer than other light machine guns, and are similar to the AK47's. The RPK has the same firing sound as the PKM in the base game. 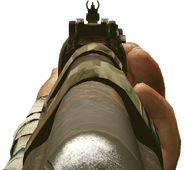 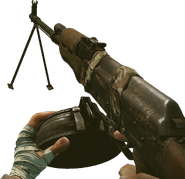 The render of the RPK 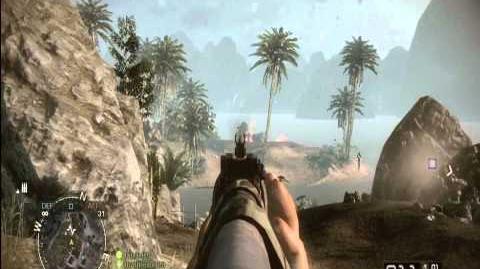 RPK
Gameplay with the RPK in Battlefield: Bad Company 2: Vietnam at Operation Hastings and Cao Son Temple in Rush mode and Vantage Point in Conquest mode 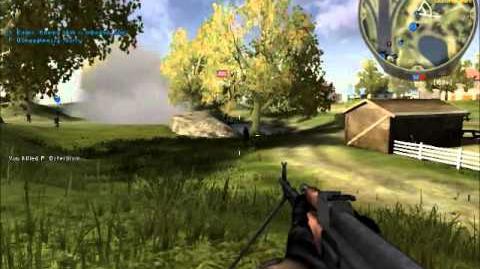 0.22
"Designed in the late 50s the Russian built RPK takes everything that made the AK the loved, reliable icon that it is today and modified it to take on the role of an LMG. The RPK may lack the range and stationary accuracy of the other LMGs in our armoury but it is a powerful close quarters weapon provides better on the move usability."

The RPK-74M is a weapon featured in Battlefield Play4Free and is available for purchase upon reaching level 22.

Reloading the RPK-74M
Add a photo to this gallery

http://symthic.com/?s=bf3Retrieved Sept. 22
http://www.ign.com/wikis/battlefield-3/RPK-74M
"The RPK-74M is an improved version of the original RPK developed in the 1950s. Essentially a heavy barreled AK-74, the RPK fires from a longer magazine and has been equipped with polymer grips to lighten the weapon. The RPK-74M also features the same scope mount as the AK-74M and is equipped with a bipod by default for supported shooting. "

The RPK-74M is a weapon featured in Battlefield 3.

The RPK-74M is the most common LMG and is commonly used by the Russian Ground Forces and the People's Liberation and Resistance. It can be found with any number of attachments and optics.

The RPK-74M is the default LMG of the Russian Army, functioning as the counterpart of the M27 IAR of the USMC. It is unlocked for the USMC upon achieving 170,000 points with the Support kit.

The two function in a similar manner, having a 45+1 round magazine and being fed by a box magazine as opposed to a belt, giving it a faster reload than the other LMGs. It has a slower rate of fire, but much less recoil than the M27. The RPK-74M has the lowest recoil of any light machine guns. Like all other light machine guns, the RPK comes default with a bipod. The very smooth recoil and high degree of accuracy (with or without the bipod deployed) allows the RPK-74M superior performance when engaging specific targets or enemies at longer range when compared to other weapons in the Support Class.

The RPK-74M and M27 IAR were the only light machine guns that did not unlock the Extended Magazine accessory. The 1.04 patch (March 2012) mistakenly enabled the RPK to equip Extended Mags, allowing it to use 200 rounds. This was fixed in the 1.05 patch (June 2012). As of patch 1.06 (September 2012), the RPK now has 60+1 rounds with Extended Magazine and is now also able to unlock the heavy barrel.

The QBB-95, and MG36 were the opposite; they started with Extended Magazines but later got them removed - however, DICE later added a heavy barrel unlock and re-added the extended mags for these two guns.

Left side of the RPK-74M

Right side of the RPK-74M

The RPK-74M model in various angles 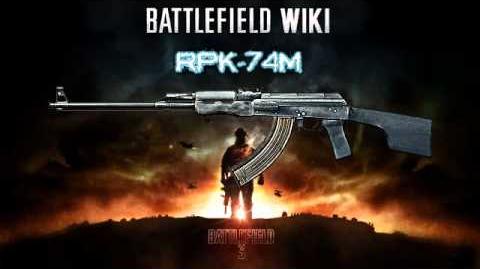 30 - 20
"The RPK-74M is an improved version of the original RPK developed in the 1950s. Essentially a heavy barreled AK-74, the RPK fires from a longer magazine and has been equipped with polymer grips to lighten the weapon. The RPK-74M also features the same scope mount as the AK-74M and is equipped with a bipod by default for supported shooting. "

The RPK, (originally named RPK-74M prior to the Summer 2015 patch) is a weapon featured in Battlefield 4: China Rising and is issued to the Support class.

The RPK retains wooden furniture as seen in earlier Battlefield games. It has a low rate of fire which makes recoil low and accuracy high over a long period of shooting. The muzzle climb is more vertical, but settles quickly close to the point where the player aims making it a useful machine gun at range. Its higher damage gives it an advantage over similar weapons like the RPK-12 and QBB-95 although it has a smaller magazine which makes it more like an assault rifle.

The RPK on the loadout screen

The RPK in first-person

Two variants of the RPK appear in Battlefield Hardline: the original RPK and the RPK-74.

The RPK is a weapon introduced in the Robbery expansion for Battlefield Hardline, categorized as an Assault rifle and available for the Criminal Operator.

The RPK's heavy 7.62×39mm round performs high damage, but also gives the weapon heavy recoil. The RPK has a slower fire rate than most of the other Operator weapons, but has a 50-round drum magazine, giving it effective suppressive capabilities.[3] Like the other AK-style weapons in Hardline, the RPK uses an RIS handguard when equipped with underbarrel or accessory attachments.

Equipped with a Heavy Barrel, Angled Grip, Stock, and Kobra

The RPK-74 is a weapon included in the Betrayal expansion, and is also categorized as an assault rifle. Unlike the regular RPK, it is available for the Operator kit of both factions.

Retrieved from "https://battlefield.fandom.com/wiki/RPK?oldid=364185"
Community content is available under CC-BY-SA unless otherwise noted.