RSC 1917 is a Codex Entry featured in Battlefield 1, introduced in the Battlefield 1: They Shall Not Pass expansion. It is unlocked upon obtaining ten kills with the RSC 1917. 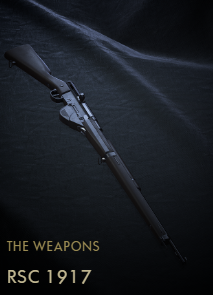 The first standard-issue semi-automatic rifle is widely known as the American M1 Garand, adopted in 1936, but few realize that France mass-issued semi-automatic rifles already 20 years earlier. Parts of the French Army were highly forward thinking, and experimentation with self-loading rifle suitable for adoption, with several models competing for contracts. The Meunier rifle was one of the leading models, but high manufacturing costs and conservatism held it back, and when WW1 broke out the French Army was still armed with the Lebel 1886.

But in the quickly evolving conditions of the war interest in semi-automatic rifles was soon renewed, and trials were resumed. In 1915 the three designers behind the Chauchat light machine gun, Ribeyrolles, Sutter and Chauchat, began work on their "Fusil Automatique", named the RSC after themselves. It was heavily based on some pre-existing rifle parts, including Lebel stocks and Berthier barrels. The Lebel had been discontinued years earlier ,and utilizing some of its parts and machinery was a way of keeping manufacturing costs down, and the trio's design was also the only one to fire the 8mm Lebel round that was standard in the Army. The first prototypes were adopted from Lebel M1886/93 rifles and immediately showed promise, leading to continued development. The Lebel rifle had a tubular magazine under the barrel, and this space was cleverly used for the gas mechanism, which tapped gas at the front of the fore end and actuated an operating rod. This is quite similar to the later M1 Grand, which some say was influenced by the RSC 1916. The RSC 1917 was loaded via a special five round clip into a hinged magazine under the receiver.

The RSC 1917 was formally adopted in May 1916, but the production got delayed almost a year and the rifle began to get deployed to the frontline in the summer of 1917, with 16 eventually being issued per company - primarily given to squad leaders and marksman. The RSC 1917 was generally reliable and appreciated by soldiers, but with the same length as the Lebel and the added weight of the gas mechanism it weighed 5.25kg unloaded, compared to 4.41Kg for a fully loaded Lebel rifle. This made the RSC 1917 clumsy and unsuitable for trench combat and 4,000 of a shorter and lighter M1918 carbine version was therefor also constructed.

When production ended in September 1918 over 85,000 of the RSC M1917 had been produced, making it the world's first semi-automatic rifle to be issued on a large scale. Interest in the RSC 1917 waned after the war, but it did see continued action in France's interwar colonial campaigns, and some were still in service during the Battle of France in 1940. Here some were captured by the Germans and later issued to the Volkssturm at the end of WW2.

Retrieved from "https://battlefield.fandom.com/wiki/RSC_1917_(Codex_Entry)?oldid=343201"
Community content is available under CC-BY-SA unless otherwise noted.