The RSC SMG is a Codex Entry featured in Battlefield 1, introduced in the Apocalypse expansion. It is unlocked upon obtaining ten kills with the RSC SMG. 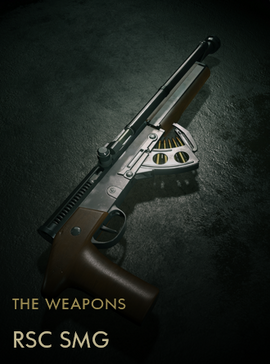 In 1918, Ribeyrolles, Sutter and Chauchat, the trio behind several French firearms, such as the Chauchat and RSC 1917, presented a compact weapon intended for French and American tank crews. The designers called it a "pistolet-mitrailleur" (machine pistol / submachine gun), and it was inteded to be fired from the firing port of tanks, or as a personal defense in case the crew had to dismount - making it the first FPW (Firing Port Weapon) in history.

The weapon was based on the semi-automatic RSC 1917 rifle already adopted by the French army, but the RSC SMG fired in fully automatic mode only, and the short gun had a gas cylinder visible on the right side of the barrel. Unlike typical SMGs it fired the full powered 8 mm Lebel round. Tests of the weapon began in summer 1918 and continued in 1919, the first model using 8-round en bloc clips and a second model using the Chauchat 20-round magazine. Both models had rudimentary sights, and their aim was intended to be directed via the use of tracer rounds. The operation of the weapon proved satisfactory, but the Lebel round produced recoil that was too powerful to control, which is probably the reason why the RSC SMG did not get adopted.

Retrieved from "https://battlefield.fandom.com/wiki/RSC_SMG_(Codex_Entry)?oldid=343250"
Community content is available under CC-BY-SA unless otherwise noted.