Rasputin is a Codex Entry featured in Battlefield 1, introduced in the Battlefield 1: In the Name of the Tsar expansion. It is unlocked upon obtaining five multikills. 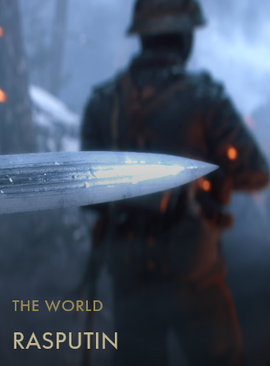 Emerging from a small rural village in central Russia, Grigory Y. Rasputin rose to prominence as a wandering religious mystic, who offered his teachings in exchange for hospitality during his journeys and pilgrimages to various religious sites. In 1903, he attracted the attention of the Tsarina Alexandra in St. Petersburg. She was desperate to find a cure for the royal heir Alexei, who suffered from hemophilia. Alexandra turned to the seemingly miraculous powers of Rasputin, who succeeded in stopping a bout of bleeding. Following this success, he not only became Alexei’s official doctor, but quickly climbed the social ladder and extended his influence over the royal court. He built his own political circle and court favorites, and warned the tsar that Russia's involvement in the war would inevitably lead to the downfall of his dynasty. Many royal and political figures despised Rasputin's influence over the Tsar and Tsarina, and his impudent, debaucherous lifestyle, and he was assassinated December 30, 1916.

Retrieved from "https://battlefield.fandom.com/wiki/Rasputin_(Codex_Entry)?oldid=343230"
Community content is available under CC-BY-SA unless otherwise noted.