Razor's Edge is a Codex Entry featured in Battlefield 1, introduced in the Apocalypse expansion. It is unlocked upon winning a round on Razor's Edge. 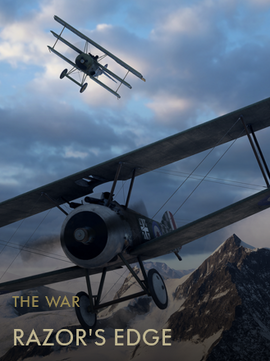 The development of specialized "scout" or "hunter" aircraft - which would come to be called "fighters" - occurred alongside advances in air combat tactics. The German military began to deploy pairs and quartets of fighters to strategically address threats on the Western Front. Other air forces would follow suit - deploying fighters and bombers with greater precision and efficiency. Aerial units were formed that consisted solely of fighters, and forward observers near the front lines could spot incoming enemy aircraft and aid in a swift response. This saved aerial units' limited supply of fighters from experiencing excess wear and tear, and allowed pilots to focus their efforts on engagement and combat. As the Great War continued, single seat fighters piloted by trained experts came to dominate the aerial arena, and necessitate the formation of trained, synchronized forces to match.

Retrieved from "https://battlefield.fandom.com/wiki/Razor%27s_Edge_(Codex_Entry)?oldid=343379"
Community content is available under CC-BY-SA unless otherwise noted.