The Recon kit is a playable kit featured in many installments of the Battlefield Series. The Recon kit functions the same as the Sniper kit from Battlefield 2, but combines some aspects from the Special Forces kit, such as a presence of C4 explosives. The class is primarily meant to engage enemy targets at long range and spot any possible threats.

The Recon kit is featured in Battlefield 2142. The player is able to equip one of two types of sniper rifles or an automatic carbine. As the player progresses through unlocks, the player will receive RDX DemoPaks, APMs, cloaking, and sniper rifle gadgets.

The Recon class is the only class capable to destroy commander assets using RDX, and can make short work of other strategic objects.

"Equipped for long range attacks and spotting the enemy"

The Recon kit is featured in Battlefield: Bad Company, serving as the base marksman's class. Users are also issued laser designators, motion sensors, and a faction specific pistol.

A US Army Recon squares off against a Russian Army Support.

"Masters of stealth. Recon specializes in sniping tangos, sabotaging vehicles with C4, or calling in mortar strikes via special binoculars."

The Recon kit is featured in Battlefield: Bad Company 2. The Laser Designator has been removed all together, while the Recon is given the choice between C4 and Mortar Strikes; the latter requires unlocking.

Recons can now also choose their weapons, not being limited by faction; as well as choosing a low-power sight such as a Red Dot Sight or a 4X Rifle Scope should they choose. Recon players may choose from several all-kit weapons.

The Recon from the Battlefield: Bad Company 2 teaser trailer. 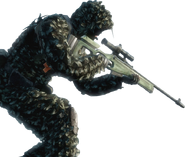 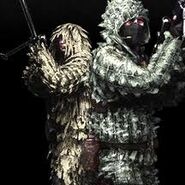 The Battlefield: Bad Company 2: Vietnam expansion removes all modern technology from the Recon kit such as motion sensors yet it adds both TNT and mortar designator. The US Recon also carries an unusable smoke grenade like the US Engineer.

The Recon kit receives two specializations that are unique to the kit. More details can be found on their respective pages.

The Recon kit is featured in Battlefield Play4Free, serving an almost identical purpose to the Bad Company 2 counterpart. Its role is to engage enemy infantry at long range and support their team by spotting enemies and throwing motion sensors. It is equipped with a sniper rifle and several gadgets obtainable via Training customization.

The Recon kit is featured in Battlefield 3 is similar to the variation seen in Battlefield: Bad Company 2, but with considerable changes. The kit is armed with either a bolt-action or semi-automatic sniper rifle, and is also able to equip all kit weapons.

The class also has access to a variety of scouting/stealth related gadgets, such as the deployable motion sensor, SOFLAM laser designator, MAV and Radio Beacon, with C4 charges and Claymore mines now belonging to the Support.

Skilled snipers can earn Marksman bonuses for headshot kills greater than 50 meters away, an award not shared with other classes. The bonus is equal to the kill distance in meters.

As an attempt to balance the inclusion of prone, any weapon (not just sniper rifles) using a high powered scope (With magnification higher than 4x), such as those used by the Recon kit, will cause scope glint.[1] which is directional based on the target's location.[2] 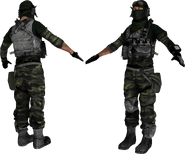 Static models of the USMC Recon.

The Recon kit is featured in Battlefield 4.

Like in Battlefield 3, the Recon has access to the Radio Beacon, SOFLAM, MAV, and T-UGS, but the assortment of gadgets has been greatly expanded. C4 explosives are available for anti-vehicle and demolition purposes, while M18 Claymores can help defend areas or cover a sniper's back. The PLD is a more mobile alternative to the SOFLAM, and throwable Motion Sensors can be used for scouting enemy positions.

The Recon soldier's primary weapon is a bolt-action sniper rifle (the CS-LR4 by default), although any All Kit Weapons (Carbines, DMRs, or Shotguns) can also be utilized to take a different role in combat.

The USMC Recon in Battlefield 4.

The standard USMC Recon from Battlelog.

USMC Recon in UCP from Battlelog.

The standard RGF Recon from Battlelog.

RGF Recon in Partizan from Battlelog.

RGF Recon in KLMK from Battlelog.

The standard PLA Recon from Battlelog.

PLA Recon in Urban from Battlelog.

The Recon is one of four base classes featured in Battlefield V. Its two Combat Roles are "Sniper" and "Pathfinder".

Fulfilling the same traditional role of long-range sniper support, the Recon has some variation in its weapons, being equipped with either bolt-action, self-loading or anti-material rifles with pistol carbines available for close quarter combat situation. Changes to the Spotting system means that the Recon-exclusive Spotting Scope, Flare Gun or Doppel Schuss is one of the very ways to apply tracking spotting icons to enemy players, granting the kit additional utility in a Squad. The kit can also be used as an infiltration unit of sorts, with the ability to put down an alternate deployment point with the Spawn Beacon.

The class also have other gadgets to use including AP Mine, Sniper Decoy and RMN50 Rifle Frag. 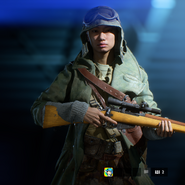 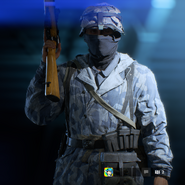