The Trijicon RX01 Reflex is an American red dot sight.

"American made Red Dot Sight for extremely fast and clear target acquisition in close quarters. The single Red Dot in this sight makes getting on target easy."

The Reflex (RDS) appears as an attachment in Battlefield 3. It is the standard red dot sight for US and Western European weapons like the FAMAS or the F2000, as the Kobra is for Russian and Chinese weapons. Functionally the two sights are identical, and can be unlocked for the opposite faction's weapons when all the faction default attachments have been unlocked for a weapon. It can be noted that the Kobra sight is arguably more open and less obstructive than the Reflex sight, as the metal frame around the reticle are thinner and block less of the player's screen. This does not necessarily make the Kobra superior, however, as some may find its reticle harder to use than the Reflex's precise dot.

3D render of the Reflex (RDS). 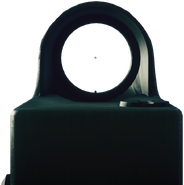 Battlelog (unlocks)
"American made red dot sight with a sharp reticle and a clear sight picture for rapid target acquisition and tracking."

The Reflex (RDS) reappears as an attachment in Battlefield 4.

The Reflex is first used on the UMP45 in Shanghai.

The Reflex is the American equivalent of the Russian Kobra and Chinese Coyote sights. It is unlocked through progression for American and European weapons, and can be unlocked for all other weapons through Battlepacks. This sight is good for players looking for a more open and easy to use alternative to iron sights for close to medium range. If one is looking to be more effective at longer ranges, a Magnifier can be equipped for higher zoom while still keeping the reflex for closer ranges.

Viewing through the Reflex (RDS) on Recker's Saiga 12K.

The Reflex [RDS] is an attachment featured Battlefield Hardline. While functioning in the exact same manner as the Battlefield 4 counterpart, the Reflex now uses an amber triangle instead of a red dot.