The Repair Tool (sometimes called Drill Wrench or Powered Wrench) is a tool that is utilized to tighten or loosen hex bolts. It is used as a gadget featured in many installments of the Battlefield Series and is typically used to repair damaged vehicles and damage hostile ones. The Wrench and Blowtorch fulfill the role of the repair tool in other installments.

Gadget
"The DysTek Repair v2.0 addition replaces the HOFF-3000's manual control with an automated repair function around your vehicle."

The DysTek Repair v2.0 is a gadget featured in Battlefield 2142 for the Engineer kit. Once unlocked, it replaces the Hoff-3000 Repair Tool as the primary means to repair vehicles. Unlike the HOFF-3000, however, the repair rate is increased. Additionally, it also allows the player to repair nearby vehicles while occupying a vehicle, similar to the Advanced Ammo Hub and Advanced Medic Hub/

In Battlefield: Bad Company, the Repair Tool is the standard secondary gadget issued to the Support class. Unlike other installments, it does not overheat and can be used continuously. In addition to repairing vehicles, it can also be used to damage enemy vehicles, as well as objects and infantry.

Aiming the tool at a vehicle, even from a distance, will show its Armor strength in the reticle. This can be useful in scouting enemy armor assets or determining the status of friendly vehicles, as well as showing progress while repairing. While playing as a Support soldier, friendly vehicles in need of repair will be marked by a yellow wrench symbol, in first person as well as on the minimap.

It is possible to use the Repair Tool while in any seat of a vehicle that allows you to use your kit weapons, such as the fourth seat of a Vodnik, to repair the vehicle on the move. The tool can also repair Artillery pieces and emplacements such as the KORD HMG and TOW missile.

6 seconds of continuous use

"This power tool was developed by armed forces as a safety valve to enable engineers to make swift and efficient repairs to damaged front line vehicles without risking further assault by sending them back to the rear."

In Battlefield: Bad Company 2, the Repair Tool takes the same form as the Repair Tool from the original Battlefield: Bad Company. Its primary role is to repair vehicles when damaged by enemy fire, but it can also be used to wound or kill enemy soldiers and damage enemy vehicles if necessary. Statistically, the repair tool is very similar to normal weapons as it uses a repair-per-shot basis. The repair tool repairs at a rate of 950 "shots" per minute, gaining 0.025 heat per "shot". Each shot repairs 6.5 health to an armoured vehicle, and the Repair Tool can fire continuously for 6 seconds before overheating. Once overheated, the repair tool has a 2-second cooldown, during which the Repair tool cannot be used. 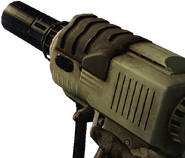 In Battlefield Play4Free the Repair Tool is a gadget available for the Engineer kit. It works similarly to its counterpart in the Bad Company series and also uses the same model. It is the primary means to repair vehicles, with the other being Field Repair Vehicle. Its repair speed can be increased by spending points in the Vehicle Repair Tool training option.

The Repair Tool is a gadget available in Battlefield 3 for the Engineer kit. It takes the form of a blowtorch.

The Repair Tool appears in Battlefield 4 in the form of a blowtorch.

The Repair Tool appears in Battlefield Hardline in the form of a blowtorch.

The Repair Tool is a gadget available in Battlefield 1 for the Tanker, Pilot, and Support classes. It takes the form of a wrench-hammer multi-tool.

The Specialized Tool is a class feature available in Battlefield V. Taking the form of a blowtorch, it is accessible through use of the Toolbox carried by the Support, Tanker and Pilot classes. Unlike prior installments, it does not take up a gadget slot.