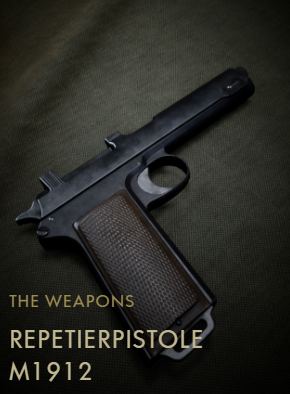 In the early 20th century, the armed forces of the Austro-Hungarian Empire had outdated pistols and the old 19th century Gasser revolvers. But with war in the neighboring Balkans and general instability brewing in Europe, the military wanted an upgrade. A Czech firearms engineer that had previously designed weapons for the army was called in to design a new pistol in 1911.

The resulting weapon had a large milled steel frame and few moving parts, making it extremely durable. Unlike modern pistol designs, the M1912 did not have a detachable magazine, but the advantages were that there was no removable magazine that could be lost and the reloading of the gun was very similar to that of a rifle, which made training easier.

In 1912 the pistol was officially adopted by the Austro-Hungarian army. The M1912 soon showed its great durability in the mountain war between Italy and Austria-Hungary, and it became so popular that it was ordered in much greater numbers.

The M1912 was often sold and equipped with a detachable shoulder stock. During WW1, there were fully automatic machine pistol versions of the M1912 called M. 12/P.16. It had an extended 16-round magazine and a fire selector switch. An even more spectacular version of the weapon was the M. 12 Doppelpistole. This was simply two M.12/P.16's stacked next to each other with a single shoulder stock between them.

Other nations that ordered the M1912 included 16,000 pistols by Bavaria, 6000 pistols by Romania and an unknown number of Chile and Bulgaria. By the end of WW1 about 300,000 M1912 pistols had been produced and they went on to see much service in WW2.

Retrieved from "https://battlefield.fandom.com/wiki/Repetierpistole_M1912_(Codex_Entry)?oldid=343159"
Community content is available under CC-BY-SA unless otherwise noted.