"Rescue is one of two competitive modes, and it’s go-time for the fuzz. You’re a SWAT operative tasked with saving innocent lives from the hands of criminals. Lead your team carefully into dangerous hoods and get the hostages back to safety. Watch your step - there are no second chances in this mode." 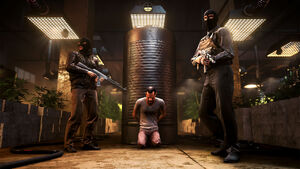 Rescue is a gamemode featured in Battlefield Hardline.

The objective of Law Enforcement is to rescue two hostages that are being held in two separate locations by the Criminals. Alternatively, they can also eliminate all of the Criminals. On the other hand, Criminals must prevent the Police from reaching the hostages by eliminating them. This must all be done in under three minutes or else the Criminals will automatically win the round.

Players from both teams have only one life, meaning that once they die, they cannot respawn and have to spectate the rest of the round. 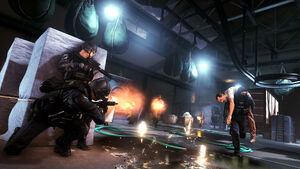 If one of the hostages is being carried by a Law Enforcement officer and the timer runs out, the round will go into "Sudden Death", and the police will have one additional minute to complete their objectives. The round will end if the escorting officer is killed, even if others remain.

One match holds nine rounds, requiring that a team obtains at least four wins unless a tie has occurred.