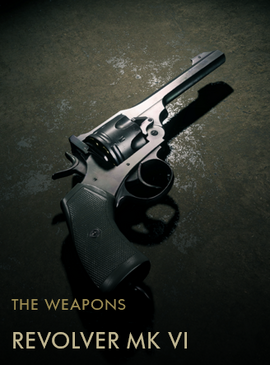 The Mark VI revolver was the culmination, and probably the most well-known of a long line of British .455 service revolvers, starting with the Mark I which was adopted in 1887 and fired a blackpowder cartridge. All of the models were top-break, double action revolvers with a 6-round capacity, which would automatically eject all the cases when breaking open for reloading. They were often the chosen private purchase sidearm of British officers, and were also popular with target shooters of the era. They were very robust and powerful weapons, which could be loading quickly using speed loaders such as the "Prideaux Device".

The Mk IV model was introduced in 1899 and became known as the "Boer War Model", as it saw extensive service in that conflict. The Mk V model was adopted in 1913 and was the first to make use of smokeless ammunition, and it was the standard British sidearm at the outbreak of WW1. The Mk VI was adopted in 1915 and was issued to officers, airmen, machine gunners and naval- and tank crews. The Mk VI proved highly reliable and well-suited to the muddy conditions of trench warfare is is today strrongly associated with WW1. During the war there were several accessories available for the Mk VI, such as the Pritchard bayonet, and a stock which converted the revolver into a handy carbine. The Mk VI was produced until the early 1920's, but it was still widely used during WW2 and wasn't officially retired until 1963.

Retrieved from "https://battlefield.fandom.com/wiki/Revolver_Mk_VI_(Codex_Entry)?oldid=343255"
Community content is available under CC-BY-SA unless otherwise noted.