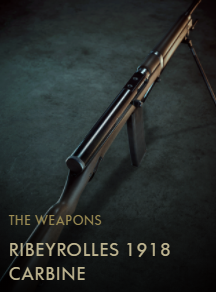 The bicycle factory Gladiator, with its three designers; Ribeyrolles, Sutter and Chauchat, would produce some of the most important and successful French automatic weapons of WW1. The trio began work on what was to become the Chauchat light machine gun in the years before the war, and later they designed the RSC 1917 semi-automatic rifle. Several other fully automatic weapons would emerge from the Gladiator factory, but probably the most important yet obscure of these was the Ribeyrolles Machine Carbine 1918 - considered by many today to be the first true assault rifle.

Before and during WW1 France purchased large numbers of the American M1907 Self Loading rifle, firing a proprietary .351 intermediate cartridge, with power between a full rifle round and a pistol round. Many of the M1907s were used highly effectively in trench warfare as "proto assault rifles", and this weapon and its ammunition would inspire French weapon designers.

Paul Ribbeyrolles was the General Manager of the Gladiator factory, and from 1916 he led the design of their Machine Carbine and its experimental intermediary cartridge, the 8x35 Ribeyrolles. The cartridge was a necked down .351 M1907 casing, combined with an 8mm Lebel bullet - resulting in the first truly intermediate round. The weapon itself was a compact, blowback operated carbine with a detachable 25-round magazine, a fire select switch for semi- and fully-automatic fire - but also a folding bipod and lugs for the Berthier bayonet. The Ribeyrolles 1918 therefore met all the modern criteria that have been established for an "Assault Rifle", about 30 years before the STG44 and AK-47. The Russian Federov Avtomat was designed a few years earlier than the Ribeyrolles 1918 and used the intermediate 6.5x50mmSR Arisaka cartridge, making it a contender for the title.

The first military trials for the Ribeyrolles 1918 Machine Carbine were held in July 1918, but unlike the RSC 1917 it was not immediately adopted - an important difference being that the RSC 1917 used regular 8mm Lebel rounds which significantly simplified ammunition logistics. The Ribeyrolles 1918 continued to be tested for the rest of the war, and some sources claim it was approved for frontline testing. The 8x35 Ribeyrolles round was found to have a maximum effective range of 400 meters, which was considered unsatisfactory at the time. At 5.1kg unloaded, there were also complains about the weight of the weapon, which was peculiar considering the fact that the Chauchat was nearly twice as heavy, and the MP18 only about a kilo lighter.

Today an effective range of 400 meters is considered well within the requirement for an Assault Rifle, but these findings at the time, together with the fact that the Ribeyrolles 1918 was equipped with a bipod, reveals that the weapon was still primarily intended and expected to be a squad support weapon like the light machine guns of the era. This is hardly surprising, as the concept of the Assault Rifle was not named and defined until the end of WW2. The Ribeyrolles was ultimately rejected by the French army in 1921. Perhaps it arrived too early for its own good, and may have been received much more favorable [sic] if it was better understood for what it was.

Old Codex Entry picure
Add a photo to this gallery
Retrieved from "https://battlefield.fandom.com/wiki/Ribeyrolles_1918_Carbine_(Codex_Entry)?oldid=343199"
Community content is available under CC-BY-SA unless otherwise noted.