Battlefield Wiki
Register
Don't have an account?
Sign In
Advertisement
in: Standard, Developers of the Battlefield series

Ripple Effect Studios, formerly DreamWorks Interactive LLC, EA Los Angeles, Danger Close Games and Digital Illusions CE Los Angeles, is an American video game developer. The company is stationed in Los Angeles, California and is owned by Electronic Arts. It is primary known for its work on the Medal of Honor series, Command and Conquer series, and Battlefield franchises.

The studio released its first great success, the original Medal of Honor, in 1999 for the PlayStation. The studio was acquired in 2000 by Electronic Arts and then subsequently merged with Westwood Studios and EA Pacific and renamed to EA Los Angeles in 2003.

EA Los Angeles rebranded as Danger Close Games in 2010 with the intent of using the name Danger Close for all future Medal of Honor titles, and under which they went on to release Medal of Honor (2010), a modern take on the franchise. The studio also assisted in the development of Battlefield 3 at the time.[1]

Following successful sales of Medal of Honor (2010), the studio released Medal of Honor: Warfighter in late 2012. Following poor sales, however, much of the staff was laid off and the studio was subsequently rebranded as DICE LA in April 2013.[2]

The reformed studio helped in development of Battlefield 4 and led the development of the Second Assault, Dragon's Teeth, Final Stand, and Operations expansions. Additionally they developed the Community Test Environment. The studio also developed post-launch content and a competitive mode for Battlefield 1 and Battlefield V.

On July 7th, 2021, Electronic Arts rebranded DICE LA to Ripple Effect Studios.[3] The studio is currently assisting with the development of Battlefield 2042 and is also working on an unannounced project.

The old logo of Danger Close 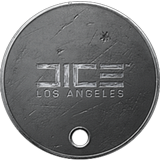