River Clyde is a Codex Entry featured in Battlefield 1. It is unlocked upon killing five enemies with grenades in the chapter Be Safe of the singleplayer mission of The Runner.

The enemies must be killed with the 3 grenades you are given to start the mission, and it cannot be earned with grenades picked up throughout the level.

THE TROJAN HORSE OF GALLIPOLIEdit 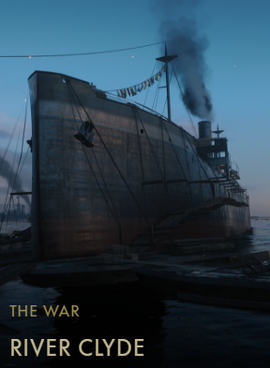 A ten year old coal ship called the SS River Clyde was converted to bring 2000 soldiers to the infamous V-beach near the Turkish village of Sedd el Bahr at Cape Helles on the Gallipoli peninsula.

THE RIVER CLYDE REMAINS A LEGENDEdit

The plan was to ram the ship into the shoreline and allow the troops to storm the beach from barges attached to walkways hanging on the side of the ship. This might have worked as planned, but the reality was that the Ottoman defenders had a great line of sight and fired directly into the spots from where soldiers emerged, and many were killed in the initial attack. Despite this, after two days of fighting the village and the fortresses nearby were taken by the invaders. The River Clyde remains a legend and a symbol for the British landings at Gallipoli.

Retrieved from "https://battlefield.fandom.com/wiki/River_Clyde_(Codex_Entry)?oldid=343420"
Community content is available under CC-BY-SA unless otherwise noted.