River Somme is a Codex Entry featured in Battlefield 1, introduced in the Apocalypse expansion. It is unlocked by winning a round on River Somme. 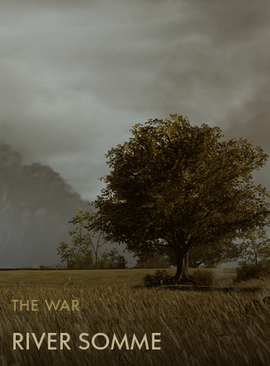 It was intially planned as joined Franco-British attack to deny the German army the initiative on the Western Front, but as 1916 unfolded, British Commander in Chief Sir Douglas Haig neede to take some pressure off the French army as they tried to stem the German tide at Verdun. A new attack in unison with allied offensive on the Eastern and Italian Fronts could thwart the Central Powers ability to relocate reserves between their fronts and eventually lead to a decisive breakthrough. For the Western Front attack, thirteen British and five French divisions were chosen to attack the German 2nd Army on both sides of the River Somme.

The vicious preliminary bombardment on June 24th by 1500 heavy guns and howitzers was supposed to destroy the German positions entirely, but many shells were ineffective in the muddy terrain and failed to cut the German barbed wire. As the British and French soldiers went over the top July 1st, the German defenders rose from their dugouts and brought their guns to bear. While the French assault south of the river took the Germans off guard, the British in the north were held up by fortified bunkers and barbed wire and took tremendous casualties from alert defenders. Heavy fighting for the smallest amount of ground in multiple renewed offensives forced the Germans to transfer reinforcements from Verdun to the Somme, but the Somme became a bloody battle of attrition, and though the newly constructed Mark I tanks were sent into battle to tip the scales and had great shock value, they were extremely unreliable and unable to make a difference. Winter ended the struggle on November 18th with the Entente gaining 12 km of ground for over 600,000 casualties.

Retrieved from "https://battlefield.fandom.com/wiki/River_Somme_(Codex_Entry)?oldid=343384"
Community content is available under CC-BY-SA unless otherwise noted.