Rock and a Hard Place

Rock and a Hard Place is the tenth mission in the singleplayer campaign of Battlefield 3.

In the forests of Araz ValleyEdit

The player starts out in the back of a Growler ITV, next to a sleeping Matkovic. They are en route to link up with the rest of the Misfit units, who have started to move towards the villa of the Russian arms dealer Amir Kaffarov in northern Iran. However, as they move through the forest, they are ambushed by an unknown unit. After successfully fending off the first attackers, Blackburn and his squad learn that the Russians are also in the region - according to some of the Marines, their intent is to kill Kaffarov so as to cover up their assumed involvement with the PLR.

The combat towards the valleyEdit

As the Marines make their way to the highway, they link up with a convoy, the other Misfit units, observing a very large combat jump being made by the Russian forces in the valley. A decision is made after some discussion regarding the possibility of sending Russia and America to war, and after Cole tells them that self-defense is not 'war,' the Misfit units move towards Kaffarov's villa, with the intent of continuing their set mission. Along the way, the Russian airborne soldiers put up heavy resistance, killing or incapacitating many of the Americans, and disabling or destroying many of the vehicles. By the time Blackburn, his squad, and Cole reach the end of the ground resistance by destroying and killing most of the Russian unit, most of Misfit has been disabled.

Suddenly, while the remaining marines are debating what to do next, a Russian Su-25TM streaks overhead, strafing the Marines. After an initial confusion, it is revealed that the necessary anti-air weapons - the FIM-92 Stingers - were on the Growler ITVs that were at the head and rear of the convoy. They make a dash for the ITVs at the front of the convoy, realizing it was too far to go back to the ones at the rear of the Convoy, moving from cover to cover as the Su-25 makes passes at them. Finally, Blackburn obtains a Stinger and manages to bring down the Russian fighter. However, he learns that on the aircraft's last pass, Christian Matkovic and Steve Campo were both killed. When Montes sees Matkovic and Campo have died he says "You fuckin' dick Steve" displaying how upset he is with Campo for leading himself and Matkovic to their deaths by not standing up to Cpt. Cole. This leads Montes and Blackburn to separate themselves, and arrive at odds with Cole, who seems undeterred. 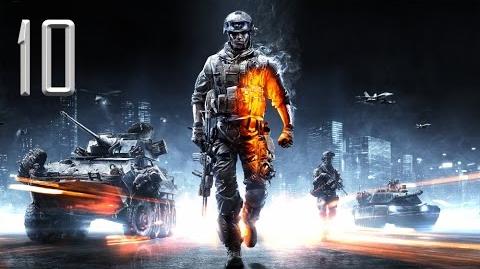 Retrieved from "https://battlefield.fandom.com/wiki/Rock_and_a_Hard_Place?oldid=353454"
Community content is available under CC-BY-SA unless otherwise noted.