Symthic
"For safe handling of this experimental weapon it does not actively store its full charge. Once engaged, it takes a second to build up energy before discharging a heavy sabot round at extreme velocity. The operator must manually track moving targets during this charge time."

The Rorsch fires a heavy sabot round at a very high velocity, and causes incredible damage on impact, always killing a player on contact. However, the weapon has a one-second charge-up before firing, and can only fire one round at a time, with the operator having to load another round into the gun after firing, with only seven rounds in reserve (the ammunition cannot be replenished). The weapon is equipped with a blue laser sight and a specially designed 20x scope, which displays the angle of elevation from the player, the player's directional heading in degrees, as well as the distance to the target. Notably, this scope causes Scope Glint like other Sniper scopes when aiming. When firing, the weapon's charging time is represented by three successive high pitched beeps and arrows pointing towards the crosshair in the scope.

Due to its charge up time, the player must track the target or predict their position. However, because of its incredibly high velocity, this is the only thing the shooter has to account for, as the projectile has no drop and will hit target almost instantaneously due to its travel speed. The charging time, while fairly short, can be a potential hindrance in close quarters combat, along with the very long reload time should the player miss, but the attached laser sight can offer some assistance in keeping enemies on target. The projectile's high damage also gives the player an edge in combat, as the round will always kill its target.

The Rorsch's projectile also causes a small explosion upon impact. This will cause splash damage to infantry around the target, and allows the weapon to be capable of attacking vehicles. The splash damage is capable of killing a player at full health if it hits very close to them, similarly to an anti-tank rocket. Against vehicles, the Rorsch is most effective against vehicles that are not heavily armored. The weapon is able to destroy light transports in two hits, and deals 20-40% damage against helicopters. Heavier vehicles like IFVs and MBTs should be avoided, as the Rorsch requires a significant number of hits to actually destroy them. The Rorsch's long reload time and small ammunition reserve will be a hindrance in combat with heavy vehicles.

The Rorch Mk-1 has an approximate respawn timer of 45 seconds. 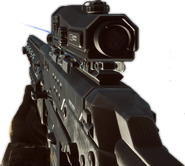 Muzzle flash from the Rorsch

A Rorsch Mk-1 wielded by a Russian soldier in Karelia

Blue tracer upon firing, visible for only 2 frames (60 FPS) because of the sheer speed of the projectile