The Ross MkIII is a Codex Entry featured in Battlefield 1, introduced in the Apocalypse expansion. It is unlocked upon obtaining ten kills with the Ross MkIII. 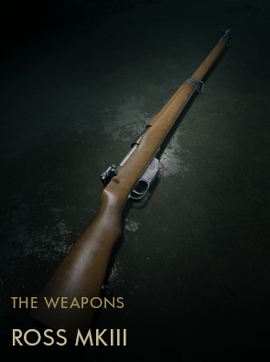 Designed by Scottish-born nobleman Sir Charles Ross in the late 1890’s, the Ross rifle was a straight-pull bolt-action rifle inspired by the Austrian Gewehr M.95. With its quick action and exceptional accuracy, the Ross rifle soon became popular as a civilian sporting rifle, and in 1907 the Ross Mk II model was chambered in the new .280 Ross cartridge, which was the first to achieve a velocity of over 3000 feet per second.

After the Second Boer War, Canada needed a modern rifle for its armed forces, but was turned down for purchasing or even licensing production of the British SMLE rifle. Sir Charles Ross stepped in and offered to set up a factory to produce the Ross rifle in Quebec, which was approved by the Canadian government. The first Ross rifles were delivered to the Canadian military and the Mounted Police in 1905, who immediately found many faults with the weapon. This led to a number of redesigns and updates, and in the summer of 1911 the Canadian army adopted the Ross Mk III chambered in .303 British. This model was equipped with a Lee-type single stack magazine protruding below the stock, loaded with 5-round stripper clips, and it would be the standard rifle of the Canadian army as it entered WW1. But the Ross Mk III proved unsuitable to trench warfare, with close chamber tolerances and high sensitivity to dirt and fouling. Another fatal flaw was that the bolt could be assembled incorrectly, and the rifle fired with the bolt not locked to the receiver, resulting in the bolt launching backwards into the shooters face. A safety rivet was later added to prevent this, although it also made disassembly and cleaning of the rifle more complicated.

Canadian Minister of Militia and Defence, Sam Hughes repeatedly ignored reports of serious issues with the Ross rifle, but eventually the evidence became overwhelming. In 1916, British military high command ordered the Ross to be withdrawn from the frontline, to be used as training rifles and replaced with the SMLE, and the same year Hughes was forced to resign. But the Ross Mk III continued to be used by many snipers, such as Henry Louis Norwest and Francis Pegahmagabow, who appreciated its superior accuracy and could take better care of their rifles. During WW1, about 1,400 Ross rifles were equipped with two different models of telescopic sights. After being withdrawn from frontline service, salvaged Ross rifles were shipped home and some were sold to hunters. The Ross rifle was also the basis of the Huot Automatic Rifle design of 1916, which was being favorably tested in late WW1. During WW2, surplus Ross rifles were used by the coastal defence, Canadian Navy, police forces and others.

Retrieved from "https://battlefield.fandom.com/wiki/Ross_MkIII_(Codex_Entry)?oldid=343253"
Community content is available under CC-BY-SA unless otherwise noted.