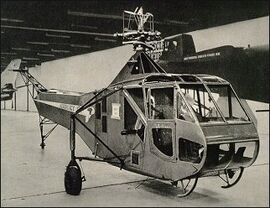 A stylized Sikorsky R-4 appears in Battlefield Heroes as the Royal Helicopter.[1]

The Royal Helicopter is a vehicle featured in Battlefield Heroes for the Royal Army. It was introduced in the Steampunk Heroes update and is the equivalent of the National Helicopter.

The vehicle features a fast firing machine gun that is effective against enemy infantry and vehicles. The vehicle has relatively weak armor and a slow flying speed, making it an easy target for enemy players.

Helicopter combat over Victory Village.
Add a photo to this gallery

Retrieved from "https://battlefield.fandom.com/wiki/Royal_Helicopter?oldid=357492"
Community content is available under CC-BY-SA unless otherwise noted.