The Ruby pistol is a Spanish-produced derivative of John Browning's FN Model 1903, chambered in .32 ACP. Originally developed by Gabilondo y Urresti and first manufactured in 1914, eventually over fifty different Spanish companies would be involved in its production due to its high demand. Although adopted by several European militaries including Belgium, Greece and Italy, the Ruby is perhaps best known for its service with the French Army, who used it extensively in World War I. Although due for replacement by the outbreak of World War II by the Modèle 1935 pistol, budgets cuts meant the Ruby remained in frontline service during the Fall of France, after which it saw continued use by the Wehrmacht and French resistance. Production of Ruby pistols in Spain ended in 1958.[1]

1.2
0.1 ┴ 0.1
"The Ruby pistol was incredibly easy to use, which was why it survived long after World War II. It first saw action in World War I, and it was a great back-up weapon in trench warfare."

The Ruby is a weapon featured in Battlefield V. It first appeared in the closed beta at Gamescom 2018.

The Ruby is one of the starting weapons of both the 1942 section of My Country Calling and Tirailleur, alongside the Kar98k and Chauchat, respectively.

The second sidearm unlocked in the game, the Ruby is tied for the fastest-firing handgun with the Repetierpistole M1912 coupled with the highest magazine capacity of 9+1 rounds and lowest-in-class vertical recoil. It retains the four body-shot kill potential of most other magazine-fed pistols available out to 12m, and drops to a five shot kill beyond 22m. However, the Ruby suffers from greater damage drop off at long range than any of its contemporaries, requiring a maximum eight bullets to kill. The Ruby is therefore best suited for close range encounters, where its higher magazine capacity is more forgiving for missed shots and allows users to engage multiple targets without reloading while keeping within range for its maximum damage.

The Ruby Red Devil is a variant with a unique skin, unlocked for owners of the Deluxe Edition of the game. 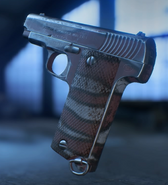 Red Devil Skin
Add a photo to this gallery

Retrieved from "https://battlefield.fandom.com/wiki/Ruby?oldid=374658"
Community content is available under CC-BY-SA unless otherwise noted.